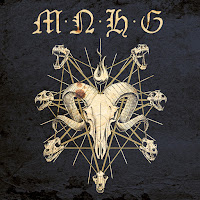 Band: MNHG
Location; North Rhine-Westphalia
Country: Germany
Genre: Black n roll
Full Length: Mundare
Format: Digital album, jewel case CD
Label: Immortal Frost Productions
Release date: February 26, 2021
MNHG is a German black-n-roll band comprised of ex-members of Thyrgrim who disbanded in 2017. Black-n-roll may seem to be a limitation filled genre, but this band takes a step toward broadening its range. After playing black/pagan metal for about twelve years they strip extreme metal to its basics for their debut full length “Mundare”, a Darkthrone-meets-The-Road-Warrior soundtrack to the Book of Revelations-foretold Apocalypse. Here the Beast of Revelation is stepping in to complete the job humanity started by launching World War III, striking when all is ruins and nomadic gangs struggling to claim what’s left. Remember when Prince promised to party like it’s 1999? Well MNHG go ahead and do so, knowing what’s coming with a drive to revel in life right to the bitter end, indulging in their figurative last celebration for all it’s worth. If Thyrgrim was the distant gone-but-not-forgotten past, MNHG is a future where everything is on the brink of ending. I listened to some of Thyrgrim’s old material while reviewing “Mundare” (go to Spotify if you’re interested). It’s a far cry from what they’re doing now, leaning closer to epic themes and exploring traditions of centuries past. While MNHG as a separate entity is less intricate and more direct, with raunchier guitars, the band is still in the practice of cramming many riffs and conflagrant guitar solos into their songs. In some ways “Mundare” is a darker album (understandable considering the subject matter) but the darker qualities are uplifting and it isn’t necessary for you to be nihilistic or misanthropic to be put into a good mood while you’re listening. Their black-n-roll tag is fulfilled to the fullest by drawing on the dirty, gritty qualities of 90s black metal and black/thrash metal without wasting energy trying to convince you to have fun. I quit drinking years ago but their redirected energy and razor sharp bite invite you in for a couple beers, inspiring me to get a natural buzz. Just one track is persuasive enough to make you want to hear more. Most 80s arena bands couldn’t have hoped to recapture the penetrating animation the band preserve from Thyrgrim, without party rock’s masochistic, self-destructive excess. If you saw the convivial spirit in Venom’s early albums, you should give this a listen sometime soon. –Dave Wolff
Lineup:
Kain: Vocals
Irrsinn: Guitar
Berath: Bass
Max Scheefeldt: Drums
Track list:
1. Introduction
2. Blasphemic Warfare
3. The False Prophet, Rise
4. Babylon, The Whore
5. Praise The Beast
6. Reborn In Suffering
7. Ride For Me
8. I.N.R.I.
9. The Darkest Strain
10. Here Comes The Truth
11. Revelation
12. Transition
Posted by Dave Wolff at 6:05 AM