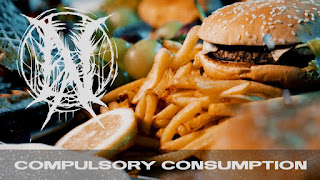 Band: Necrotted
Location: Abtsgmünd, Baden-Württemberg
Country: Germany
Genre: Death metal/deathcore
Single/video: Compulsory Consumption
From their upcoming album “Operation: Mental Castration”, to be released on Reaper Entertainment Europe March 19, 2021
Release date: March 5, 2021
I found Necrotted’s new video, the third for their upcoming new album, by chance, and decided to check it out for its subject matter as much as the gore it promises to show you. Like many bands who use metal-associated imagery as a vehicle for their views on politics, media and corporate greed, Necrotted make a professionally shot mini-film about consumerism and what they call “the consumer fetishism of the capitalist economic and social order.” That may come across as long-winded, excessively anarchistic and possibly preachy to some, but to me “Compulsory Consumption” doesn’t differ that much from Deceased’s concept album “Fearless Undead Machines” or the late, great George Romero’s “Dawn of the Dead”. The common theme is a public that’s always eager to buy without stopping to think if they’re buying something they really need. The video depicts the band at a banquet table full of food, shamelessly consuming everything within their reach, gradually behaving in more of a primal and animalistic manner until they literally eat themselves to death. For the desensitized listener of death metal, what is shown in this four and a half minute video/film is relatively tame and inoffensive. Still there is something inherently repulsive and sickening about this depiction, to the point that it doesn’t require gore to make its point. The song is relentless, brutal and replete with impossibly quick blast and double bass, and the vocal range goes from guttural to high pitched, as if representing the consumer in a state of internal conflict between his desires and the vested interest of the consumer system he is a part of. The way the song and video complement one another isn’t intended to shock and horrify as much as to point out the obsessive need to own and consume, own and consume, regardless of the long term impact this cycle will have on the human race as a whole. The band themselves comment on the physical and moral strain they experienced during the making of this video; that their actions appear to be real makes it all the more unsettling. You’ll find the lyrics in the same liner notes, so there’s no cause for concern about vocal clarity. -Dave Wolff
Lineup:
Fabian Fink: Vocals
Pavlos Chatzistavridis: Vocals
Philipp Fink: Guitars
Johannes Wolf: Guitars
Koray Saglam: Bass
Markus Braun: Drums
Posted by Dave Wolff at 1:28 AM