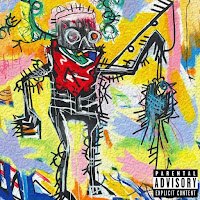 Artist: Mach-Hommy
Location: Newark, New Jersey
Country: USA
Genre: East Coast Hip Hop
Full Length: Pray for Haiti
Format: Digital
Label: Griselda Records
Release date: May 21, 2021
As you may have guessed, it’s review time! and today’s is actually an album I’ve been listening to for a while now and it came out a few months ago I just have been prioritizing other albums in front of it but today it finally gets its time to shine:
-Pray For Haiti by Mach-Hommy.
So, this is my first experience with Moch, from what I’ve heard he’s been in the game for a while and on top of that all attempts to contact him via social media have been to a dead end as he must be quite the private guy which reflects into his music.
This might be a biased opinion but for me, this is the perfect Griselda project as it combines the two things I don’t normally find which is Westside Gunn’s extreme brand of Grimy production and Benny/Conway level bars and flow.
Although all three members make hard-hitting East Coast flavoured beats I feel Westside takes things to an uncomfortably shocking new level which I’ve found to become addicted to, but as Westside uses his large personality and unique voice to make up for his lack of mic skills (compared to his two brothers) you don’t often get those tight bars hand to hand with his trademark sound.
But on here that all changes with Mach because on this album he lays down some of the coldest flows and bars of all year! And doing so behind Westside’s brand of Grime is truly amazing!
Another thing that stands out Mach is his occasional use of harmonic singing for the choruses, I was surprised to hear that not only could he deliver killer lines but also beautiful notes which went perfectly with the production.
Although this album is 16 tracks it doesn’t feel that long, this is a masterpiece of timing, album flowing and there’s even a hint of conceptualized thought with a handful of the songs ending with what sounds like foreign politics which gave the album that ‘dark’ and ‘pessimistic’ feel on top of the already murderous aura the record gives off.
In my opinion, if you combined the lyrical wit of Freddie Gibbs with the most hard-hitting and experimental sounds Griselda has to offer then this is what you would get as a result, it’s harsh, unforgiving, and raw to the core, this album won’t be for everyone but I feel like if you give it a chance then you’ll at least respect the direction and the creative risks poured into this project! –Corban Skipwith
Track list:
1. The 26th Letter
2. No Blood No Sweat
3. Folie Á Deux
4. Makrel Jaxon
5. The Stellar Ray Theory
6. Marie
7. Leta Yo (Skit)
8. Kriminel
9. Pen Rale
10. Murder Czn
11. Magnum Band
12. Rami
13. Kreyol (Skit)
14. Au Revoir
15. Blockchain
16. Ten Boxes - Sin Eater
Relentless Reviews With Corbz
Posted by Dave Wolff at 5:30 PM