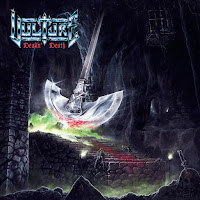 Band: Vulture
Country: Germany
Genre: Speed/thrash metal
Full Length: Dealin’ Death
Format: Digital album
Label: Metal Blade Records
Release date: May 21, 2021
Two decades ago, what is being called the new wave of thrash metal began and there is always a band to ensure it doesn’t grow tedious, overdone or boring. Going by the response it’s receiving on social media sites, Vulture’s latest full length has been greeted with nothing short of praise. One listener said they’ve not only revived speed metal but carried it to the next level. Another said they’re worth placing alongside eighties pioneers Exciter and Razor. Feedback such as this would have to persuade me to give Vulture a chance to see if they warrant the props. Listening to “Dealin’ Death” I thought several times of what would result from a meeting with Exodus and Ratt (if they were heavier and less mainstream friendly) with twice the energy, conviction and dedication to tight musicianship. This band (featuring former members of Beer Pressure, Bulldozing Bastard, Luzifer and Hellhunt among others) give validation to underground metal’s formative years, taking the speed, power and thrash subgenres, stripping them down, polishing them with cleaner production and more clear-cut guitar progressions, presenting their treatment as holding its own next to brutal death metal and melodic hard rock. In doing so they establish that toning down, trying to be marketable or just changing is needless. Metal Blade obviously see this in Vulture and appreciate their vision of the direction power metal could have taken if not for unwelcome pressure to soften. Being that they’re from Germany they have a firm grasp on their country’s early thrash scene inspired by the NWOBHM and the industrial working class environment it came from. Besides Agent Steel, Testament and Megadeth I heard Iron Angel, Destruction, Necronomicon and even early Kreator. This band comprehends the drive and super-unleaded-gas eagerness with which those bands composed groundbreaking music for their time. Vulture’s impermeable songwriting, horror film, mythology, classic literature, historical account and occult tale themes and vigorous musicianship is constant and reveals many memorable hooks, even with the addition of piano and synth when it’s needed. You don’t even need a beer while you’re experiencing this album. “Malicious Souls,” “Count Your Blessings,” “Flee The Phantom” and the title cut are more than sufficient to get drunk on. –Dave Wolff
Lineup:
L. Steeler: Vocals
S. Castevet: Guitars
M. Outlaw: Guitars
A. Axetinctör: Bass
G. Deceiver: Drums
Track list:
1. Danger Is Imminent
2. Malicious Souls
3. Count Your Blessings
4. Gorgon
5. Star-Crossed City
6. Flee the Phantom
7. Below the Mausoleum
8. Dealin' Death
9. Multitudes of Terror
10. The Court of Caligula
Posted by Dave Wolff at 5:33 PM