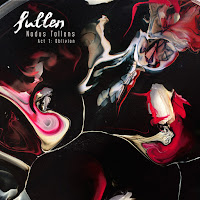 Band: Sullen
Location: Porto
Country: Portugal
Genre: Progressive metal
Full Length: Nodus Tollens – Act 1: Oblivion
Format: Digipak CD, digital album
Label: Blood Blast Distribution
Release date: March 5, 2021
What’s going on everyone, I’m back and it’s album review time! But not only that it’s also Bandcamp review time!
Ove the past year I’ve discovered more masterpieces from Bandcamp then I have anywhere else! It really is the flagship place for music quality and creativity.
But today I want to share with you an album that just blew me away for all the right reasons, Nodus Tollens Act I (Oblivion) by Sullen!
This is the latest album by the band Sullen released in March of this year. The album spans eight tracks and to be honest when I first clicked on the album I had no idea what I was getting myself into!
As soon as I hit play I was greeted with one of the smoothest and most harmonizing vocal performances I have EVER heard on a metal album (and I really mean that).
This guy is unreal and for the duration of the album he presents his unique vocal style which I loved every second of.
Although at first glance this sounds like something you’d hear from the mid to late 2000’s or even early 2010’s associated with bands such as:
-Sleeping With Sirens
-Of Mice And Men
But when you really listen to his voice it has this ‘Soul’ sound that I’ve just never heard from a metal singer before. Obviously I’ve heard amazing clean vocals such as Kellin Quinn, Corey Taylor, Gerard Way and more but this guy has such unmatched energy and vibe that I just can’t put my finger on!
When it comes to the production it also doesn’t fail to present something exciting and new with subtle blends of elements such as:
-Progressive Metal
-Alternative Metal
-Experimental
-Ambient
It really does feature this space like, outta world experience when listening in close quarters with good quality headphones, similar to the experience you would get when listening to a ‘Tool’ album how the experience transcends the music itself it’s honestly quite fascinating how they seem to pull this off.
There’s a few tracks that are just mind altering instrumental passages with ambience laced keys and synths and that final track ‘Fall Safe’ closed the album perfectly leaving the album feeling as mysterious as ever.
If you’re in the mood for something creative and different then this is definitely for you! It’s got the energy of a metal band with the curiosity of a band that’s always looking for something more and I respect that!
Link below and make sure as always you SUBSCRIBE. STREAM. SUPPORT!
https://sullenpt.bandcamp.com/
-Corban Skipwith
Lineup:
David Pais: Vocals
André Ribeiro: Guitars
Pedro Mendes: Guitars
Ricardo Pinto: Bass
Marcelo Aires: Drums, keyboards
Track list:
1. The Prodigal Son
2. Skylines (feat. Ole Børud)
3. Soul Interrupted
4. Acheronta Movebo
5. Memento
6. Human
7. The After
8. Fail-safe
Posted by Dave Wolff at 7:00 PM