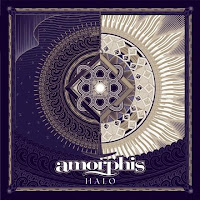 Band: Amorphis
Location: Helinski
Country: Finland
Genre: Progressive melodic death metal
Full Length: Halo
Format: CD, digital, black marbled vinyl double LP
Label: Atomic Fire Records
Release date: February 11, 2022
Sometimes you have to look back at the past to grasp the future. Thirty years, fourteen albums and Amorphis have made it an art form. Their cultural relevance is attributed to their timeless adherence to native folk tales and the values they teach. By blending melodic death metal with progressive sounds and doomy overtones, Amorphis redefine themselves from album to album, establishing newness while remaining rooted in tradition.
Having evolved since "The Karelian Isthmus" and "Tales from the Thousand Lakes", the band is now experimenting with other musical concepts to express their country’s pagan traditions and turn writing and composing into storytelling. In "Halo", they start with the best aspects of the previous albums, shape them and strip them down some, giving us an epic and monumental recording with a level of creativity that is sorely lacking in the mainstream.
There's little if anything wrong with "Halo" in terms of its production and its fusion of multiple metal subgenres. I don't claim it's their best album, but they've gone above and beyond the call of duty when it comes to writing inventively. Whether you're a fan of death metal, black metal, doom metal, or folk metal, "Northwards" has something for you. Not to mention the elements of progressive rock, orchestral choruses and traditional folk music. And we're just getting started with the first song.
The eleven songs for "Halo" were chosen from thirty that the band submitted to producer Jens Bogren (Opeth, Enslaved, Amon Amarth, Katatonia). He knew exactly what he was doing based on the ideational story these songs construct. When the band recorded these songs, they were able to concentrate on musicianship and create a conceptual tapestry. Rather than one person making all the decisions for the band, it appears to be a team effort between band and producer.
As with previous Amorphis albums like "Silent Waters," Pekka Kainulainen writes the lyrics for "Halo". His method of lyric writing is described as a lengthy, careful process of translating archaic Finnish poems into English verses for the band to adapt into lyrics. He and vocalist Tomi Joutsen (Hallatar, Sinisthra) work well together constructing and delivering the narratives describing the band’s northern journeys; It’s a shame the advance streaming I got from Earsplit doesn’t come with the lyrics because things don’t seem complete without them. Still Joutsen displays as much articulation in his guttural vocals as in his melodic style.
Amorphis recently released promotional videos for “The Moon” and “On The Dark Waters” and starting this April they’ll be touring the U.S. with the Norway-based multi-instrumentalist Sylvaine and the Oregon, U.S. based dark rock duo Hoaxed (whose debut EP is now available and who will be releasing their debut full length this year. Contact Earsplit PR for additional information and the official Amorphis site for more about the band’s activities. Atomic Fire Records’ official Youtube features video diaries about the making of “Halo”. –Dave Wolff
Lineup:
Tomi Joutsen: Vocals
Esa Holopainen: Guitars
Tomi Koivusaari: Guitars
Santeri Kallio: Keyboards
Olli-Pekka Laine: Bass
Jan Rechberger: Drums
Track list:
1. Northwards
2. On The Dark Waters
3. The Moon
4. Windmane
5. A New Land
6. When The Gods Came
7. Seven Roads Come Together
8. War
9. Halo
10. The Wolf
11. My Name Is Night