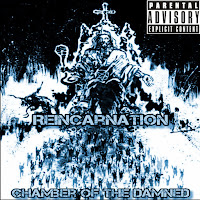 Band: Reincarnation
Location: Lexington, Kentucky
Country: USA
Genre: Death metal
Full Length: Chamber Of The Damned
Format: Digital album
Label: Misanthropik Records
Release date: January 27, 2022
It’s that time of day again! And today we will be revising
Chamber Of The Damned by REINCARNATION
So this is the January release by this newly formed (to my knowledge anyway) 2 piece band featuring members
-Jonathan Nesbitt and Erik Leviathan
and within this 8 track list there’s a lot to say.
First of all, this brings quite the uncompromising yet technically sound aspect of Death Metal, you’ve got those heavy thuds of the drums and the savage guitar shredding and patterns and the vocals here remind me a bit more of the ‘Grindcore’ style but none the less I feel the instrumentation is trademark ‘Death Metal’ and that’s what they want to describe themselves as and I would have to agree!
I think these 8 tracks provide a lot of promise because they aren’t mixed too low or lo fi to where all the small bits and pieces are all sound mashed together and unrecognizable but it’s not too flashy and over produced that it’s considered ‘mainstream’ or ‘sanitized’ to shit so I think this record finds a good balance in the middle of making a brutal ‘Death Metal’ album without sacrificing the mixing or the Integrity of a true underground style and sound.
If I had to nitpick I would say that there’s too much empty space between the end of the songs and the start of the new ones, there should be the gaps filled or at very least extend the instrumentation to right until the song passed to the next one, but again a very minor criticism.
Overall, this is a very solid experience and considering it’s just a duo making this it’s very fun, creative and badass. Any metal fan will enjoy this in my opinion and it will especially satisfy the more seasoned hardcore fans out there. Go check it out with the link below! –Corban Skipwith
Lineup:
Erik Leviathan: Vocals, lyrics
Jonathan Nesbitt: All instruments, lyrics
Track list:
1. This World Is Not My Home
2. The American Dream
3. Chamber Of The Damned
4. Final Gore
5. Devour The Plague
6. SOS (Save Our Scene)
7. The Inauguration Of Lucifer
8. Rivers Of Sadness
Posted by Dave Wolff at 10:19 AM