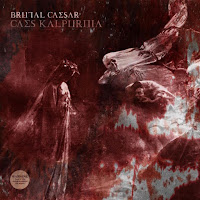 Artist: Brutal Caesar
Location: Texas
Country: USA
Genre: Hip hop
Full Length: Caes Kalpurnia
Format: Digital album
Label: Independent
Release date: March 15, 2022
Guess whose back from their long vacation? That’s right I’m all pumped and ready to go whanau and today we will be starting things off with an absolute MONSTER of an album by honestly one of the most talented new producers I’ve heard in a while! None other than Brutal Caesar and his latest record *Caes Kalpurnia*.
So, what exactly do we have here? It’s a 10 track record packed with solid features on top of some of the grimiest and banging instrumentals you’ve heard in the past few years. Honestly the way this album operates and runs it reminds me of a modern day Dr Dre 2001 in the way the Brutal Caesar uses his features, how he knows where they should go on a track and why, the methodical pacing, the brilliant executions, the art of the craft I could go on and on but point being this guy is talented.
One thing you have to understand everyone is that 8/10 a producer will just stack their albums full of generic throw away beats and then over saturate the record with features that have no rhyme or reason for being there and then over master it till it sounds like sterile shit (Cough Cough DJ Khalid).
I bring this up because it’s so rare to have someone underground or not actually take the time to make a solid collection of tracks that actually mean something! Take care and pride into all the elements of the record not just the features or not just like production but understand that it needs to be solid AS A WHOLE in order to work and I can safely say that this album is on that top tier level of greatness and I mean as the boys down in Ireland would say ‘The Proof is in the Pudding’ meaning the music speaks for itself here.
I really love the collection of feature artists he choose to accompany this record. We talking
-Zagnif Nori
-Innocent
-AFRO
-Recognize Ali
-Reks
-Illa Ghee
-Supreme Cerebral
-Vic Monroe
-Maylay Sparks
-Melly Mel
-Ras Kass
-King Magnetic
-Guilty Simpson
-Solomon Childs
-Haz& Skanks The Rap Martyr
-M-Dot
-Craig G
-Doap Nixon
Also shout out to Tone Spliff, DJ Jaffa and 𝐃𝐉 TMB on the cut credits for tracks 2, 4 and 9! But those are some underground powerhouses right there and this proves he knows his Hip Hop and is a true student of the game.
I really can’t say anything bad about this album, if you really wanted to nitpick you could say it’s not very conceptual and it’s a real ‘meat and potato’s’ type of record but that’s the beauty of it, he’s embracing the OG era of just dope rhymes over dope beats! That formula has made some of the greatest rap albums of all time because under that style there’s no fancy creativity to hide behind there’s nothing else to rely on the album being good then the strength of the bars and lyricism by the artists and the power of the production and both absolutely Murder.
Look, come March 15th you all better be ready to embrace what will be contender for rap album of the year for sure. It’s star studded, powerhouse sonic Genocide that no ear will be able to resist and I can’t wait for you all to be at the mercy of none other than THE BRUTAL CEASAR! –Corban Skipwith
Track list:
1. The Dream (feat Emma Lee)
2. Warning Label (feat Zagnif Nori & Innocent) [cuts by Tone Spliff]
3. I Hope (feat AFRO, Recognize Ali & Reks)
4. Ill Supreme (feat Illa Ghee & Supreme Cerebral) [cuts by DJ Jaffa]
5. Django (feat Vic Monroe & Maylay Sparks)
6. To Fall In Love (feat Melly-Mel)
7. 16 Daggers (feat Ras Kass)
8. Dunes (feat King Magnetic, Guilty Simpson & Solomon Childs)
9. Master of Words (feat Haz & Skanks the Rap Martyr) [cuts by DJ TMB]
10. Changing of Times (feat M-Dot, Craig G & Doap Nixon)
Posted by Dave Wolff at 10:05 AM