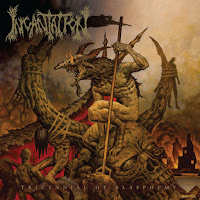 Band: Incantation
Location: Johnstown, Pennsylvania
Country: USA
Genre: Death metal
Full Length: Tricennial of Blasphemy
Format: Digital, CD, vinyl
Label: Relapse Records
Release date: July 28, 2022 (digital), October 7. 2022 (CD, vinyl)
There seems to be an eternity since Incantation was just another New York band playing darker, more extreme metal. Who would have thought that they would remain a major force in the death metal genre for over thirty years and influence generations of bands along the way? With Pyrexia, Mortician, Suffocation and Internal Bleeding they helped shape underground metal for years to come. On the Vile Ascension Summer Tour, Goatwhore, Bewitched, and Caveman Cult are accompanying them, and with their latest release “Tricennial of Blasphemy” we can relive their beginnings and look back on their history.
There are unreleased recordings, rare live tracks, compilation appearances, and songs from various seven-inch releases included on "Tricennial of Blasphemy". The most notable is a cover of "Hell Awaits" from the 2000 compilation "Gateway to Hell 2 - A Tribute to Slayer." In three decades founding member John McEntee’s vision slowly evolved from crude rhythms and sacrilegious occult themes to sophisticated lyrical concepts and innovative music that remained brutal while gaining depth, imagination and substance.
I heard of a growing trend in the recording industry towards mixing and mastering with compression with the expectation of getting a better sound. I may be off here, but “Tricennial of Blasphemy” sounds like Incantation choose instead to polish their material the old-school way. If so, this method has helped them to experiment with darker, more sepulchral ambiances while expanding on their central thrash and death metal influences. It also seems to be helping them maintain their unique essence, as can be heard in each track.
I was there when the first death metal bands appeared, and I’m well acquainted with the benefits of this approach. When everything isn't stretched to the point of breaking, you can appreciate the subtle nuances between instruments and vocals much more. As much as in the studio tracks you can hear it in the live shows from Switzerland, France and Ohio in the US. Some of the best horror movies have always been the indie features made without high tech equipment in the 80s. This principle also applies to the “organic” style of producing death metal as Incantation show on later albums like “Vanquish in Vengeance” and ”Sect of Vile Divinities”.
Incantation will stay fresh by building on what they had to work with at the beginning while we know what to expect from their album after all this time. This ensures consistency, progress, and proficient musicianship from musicians who are well versed in their field. -Dave Wolff
John McEntee: Guitar, vocals
Luke Shively: Guitar
Chuck Sherwood: Bass
Kyle Severn: Drums
Track list:
1. Pest Savagery
2. Ordained by Night's Will
3. Obelisk Reflection
4. Nefarious Warriors
5. Degeneration
6. Absolved in Blood
7. Scapegoat
8. Sacrificial Sanctification
9. Thieves of the Cloth
10. Exiling Righteousness
11. Hell Awaits
12. Horde of Bestial Flames
13. Ethereal Misery
14. Impending Diabolical Conquest
15. Forsaken Mourning of Angelic Anguish
16. Nocturnal Kingdom of Demonic Enlightenment
17. Subjugation Divine
18. Emaciated Holy Figure
19. Deliverance of Horrific Prophecies
20. Profanation
21. Intro-Entrantment of Evil
22. Eternal Torture
23. Devoured Death
24. Unholy Massacre
25. Oath of Armageddon (Live)
26. Portal Consecration (Live)
27. Impending Diabolical Conquest (Live)
28. From Hollow Sands (Live)
29. Iconoclasm of Catholicism (Live)
30. Absolved in Blood (Live)
31. Lead to Desolation (Live)
Posted by Dave Wolff at 7:39 PM