Interview with Yngve of CHRISTFUCK by Dave Wolff 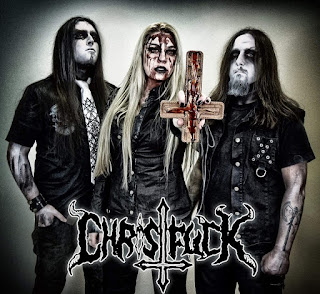 Where is the promotion company Mercyful Hell from, and how did you hook up with them to release the EP?
The label is from Peru. It is run by a person who is supportive and delivers the best possible quality. This label was recommended to me by a friend. We talked and the deal was closed.
How much publicity has Mercyful Hell gotten the band? How many countries does it reach as far as promoting its acts?
The label promoted the band mostly in South America as it is based in Peru. They have a very decent network of zines, labels and bands and are doing awesome work promoting their bands.
Did the band hire an artist to design the cover art for Hellgoat Miltia? If so, has this artist designed many album covers?
The label is cooperating with Arts Of Pervertion who does the artwork when a band needs one.
How many bands has Arts Of Pervertion designed art for, and where can they be found on the net?
You can find them here: http://www.facebook.com/artsofperversion and witness the perfection of their artwork. We are very proud and happy to have their work on our EP.
What zines in Greece and other countries got hold of your demo for review? Which of those reviews had the best idea of where the band is coming from?
There were many webzines from Greece and abroad that became interested in reviewing our EP. I was happy to see that everyone knew where this band is coming from in every aspect.
Is Christfuck currently working on new material? Will any demo tracks be rerecorded for it or will new songs be written?
At the moment the band is laying low due to Vulgate focusing on the new W.E.B.'s album. Be sure though that there are a lot of ideas for a new release. Right now I cannot say if it will be an EP again or a full length but for sure there will be no re-recordings.
How soon is the new full length by W.E.B. expected to be released?
I cannot give an answer to that, but be sure that when it is time there will be an announcement by the band. I can assure you though that it will be within 2017.
Do your bands intend to tour once your new releases are out? Will you mostly appear in Greece or do you also plan to visit other countries?
Regarding Christfuck, it could be possible to do some gigs if something good shows up but not a tour, at least not in the near future. If we play live, it will be in Greece. Other countries are not in the band's plans for now. As for the other bands, it depends on what we have to do. W.E.B. are mixing the new album, Dismal Chant are recording the first full length and Mortuus Sum are also in the process of preparing the first full release. As you can see the schedule is pretty full. Time will tell what will happen. I want to thank you for this interview and send our hails and eternal gratitude to all the Sataniacs who support us from Greece and abroad. It means a lot to us.