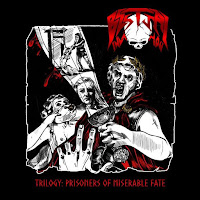 Trilogy: Prisoners Of Miserable Fate
ShellFire Attack
http://www.facebook.com/bestialinvasionua
Ukraine’s Bestial Invasion is undeniably old school thrash, but nothing you’re accustomed to. If you’re expecting the linear songwriting structure of Exodus or Testament, you’re certain to be misdirected several times. For a three song EP, Trilogy: Prisoners Of Miserable Fate is unorthodox, taking unanticipated turns to keep you wondering where it goes next. I appreciate bands that take chances such as this, even if some listeners would prefer something more straightforward and less unpredictable. Another band that gave me this impression was Charmand Grimloch’s Tartaros on The Grand Psychotic Castle and The Red Jewel, an EP and full length released in the late 90s that made real, genuine efforts to stand out from everything else released at the time. It’s always been somewhat difficult to describe the response occurring inside when venturing into such domains, but suffice it to say it’s an immersive feeling I rarely experience. The band classify their music as being a technical style thrash metal, with an assorted neighborhood of influences including Raven, Dark Angel, Coroner, Death, Destruction, Atheist, Toxik and Anacrusis. But this only explains so much if you don’t hear this firsthand. The guitars of Aleksandr Klapcov are prominent throughout these songs, speaking conspicuously of melodic black metal next to their meticulous machine gun crunch and precise time changes. The characteristic energy of thrash is apparent from the start. It is a unique choice for a first song, beginning as a mid-tempo scorcher with vocals reminiscent of John Cyriis of Agent Steel. Vocalist V. Zadiev matches Cyriis’ high notes and air raid wails so well I’d think Agent Steel should have been cited as an influence. The track goes from mid-tempo to slow to crunch to thrashy, all before the second verse. Following a long series of time changes is a lead solo close to the end; marked by a dismal piano note. Things get even stranger as the acoustic intro of Zodiac: Crime World Mystery is followed by progressive crunch before getting thrashier near its abrupt end. The final song Caligula: Salacious Age is the least predictable, starting with a bass intro followed in turn by more prog riffs, time changes and dexterous scales. All in all this is something you really have to hear for yourself. -Dave Wolff
Track list:
1. Prisoner of Miserable Fate
2. Zodiac: Crime World Mystery
3. Caligula: Salacious Age
Posted by Dave Wolff at 8:55 AM