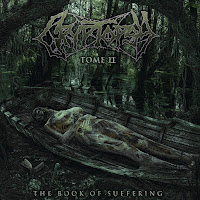 CRYPTOPSY
The Book of Suffering - Tome II
Hammerheart Records
Place of origin: Montreal, Quebec, Canada
Genre: Brutal/technical death metal
Recorded at the Grid Studio, Montreal, Quebec, Canada
Produced by Chris Donaldson & Cryptopsy
Mixed & Mastered by Chris Donaldson at The Grid Studio
All music written by Cryptopsy
Artwork by Remy C, Headsplit Designs
Band Photos by Eric Sanchez
Release date: October 26, 2018
Brutality, thy name is Cryptopsy! When I was introduced to this band in 1998 with Whisper Supremacy I couldn’t believe how tight and fast they were, especially DM drummer extraordinaire Flo Mounier. I still don’t know how they manage to play that way or even dredge up the energy to continue until today. But fans are already raving about the improved songwriting, production, range and musicianship they display on their new EP The Book of Suffering - Tome II. Four a four track MCD it does its job leaving fans wanting more as they persist in redefining themselves and Canadian death metal. The band’s earliest incarnation formed in 1988 as Obsessive Compulsive Disorder, so after working together in one form or another they know themselves and one another enough to compare with Stateside bands like Suffocation, Origin, Malignancy and Cattle Decapitation. Chris Donaldson helps bring out the band’s greatest strengths on this EP, a sequel to 2015’s The Book of Suffering - Tome I. Mounier’s blast beats and double bass are impeccable as he charges his way through each inspired, resourceful progression and time change by Christian Donaldson. Olivier Pinard’s bass has a distinctive sound which you hear in the proper amounts. Matt McGachy’s guttural bellows and bloodcurdling shrieks demonstrate dynamism and the appropriate amount of control so he doesn’t ravage his throat while laying down the vocal tracks. The EP’s Bandcamp stream also includes the lyrics to each song, so there’s no room to complain about lyrical unintelligibility. All the verses are extremely well crafted and easy to follow through the turbulent hurly-burly of the compositions. The length of each passage and their phrasing show the vast extent to which Cryptopsy have grown as lyricists. This is an asset if you’re one of those thrashers who pays attention to the lyrics. I don’t want to reveal what the songs are about but they are engaging and make you feel what’s happening with each line. All around this is a must own if you appreciate brutality, technical prowess and sophistication in equal parts. Run, don’t walk. -Dave Wolff

Track list:
1. The Wretched Living
2. Sire of Sin
3. Fear His Displeasure
4. The Laws of the Flesh