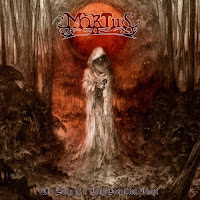 MORTIIS
The Song Of A Long Forgotten Ghost
Funeral Industries (CD, limited edition vinyl), Omnipresence Productions (Digital format)
Place of origin: Norway
Genre: Ambient, darkwave
Originally recorded as a 1993 demo
Restored and remastered by Jules Seifert at Epic Audio London, in collaboration with Mortiis
Cover art by David Thierree, inspired by and expanded upon the original cover art
Pre-orders available at Mortiis Webstore and Funeral Industries
Release date: December 7, 2018
The debut demo released by Mortiis after his departure from the Norwegian black metal band Emperor was innovative and groundbreaking for its time. He began as a solo artist in 1992, when most of what came from his imagination hadn’t been conceptualized in underground metal. Mortiis was one of the first musicians to write epic compositions solely with keyboards and synthesizers, when most bands were just enhance their material with those instruments. Taking it many steps further, he often wrote single compositions to take up half an album or an entire recording. Albums like ‘Født til å herske,’ ‘Ånden som gjorde opprør,’ ‘Keiser av en dimensjon ukjent’ and ‘En sirkel av kosmisk kaos’ are regarded as milestones in black metal and dark ambient. Somewhere along the line his work earned the title “Dungeon Synth” as did material he released with his other projects Vond and Fata Morgana). Mortiis was far ahead of his time, not just creating music but soundtracks of his journeys into the darkest regions of the netherworld. His albums carved a path for Aghast, Abruptum, Hagalaz’ Runedance and eventually dark ambient projects from several countries around the world. From the mid-90s to the present he would move on to different modes of expression with Crypt of the Wizard, The Stargate and The Smell of Rain and finally with The Grudge, The Great Deceiver and The Great Corrupter. However there are fans who remember his early releases to this day, and Funeral Industries and Omnipresence Productions are preparing to appease those long time fans when they re-release Mortiis’ debut demo. The Song Of A Long Forgotten Ghost has been reconstructed for older fans as well as today’s fans of extreme music, as an extensive labor of love. Scheduled to come out in December, the demo is treated with new cover art and an improved sound that doesn’t negate the appeal of the original. With its dark carnival feel and its divergent themes, sounds and atmospheres, the remastered demo transports you into a world of Mortiis’ devising, with dark wizardry, dusky landscapes, crones, trolls, witches and preternatural creatures too bizarre to describe. The impressions it gives you of wandering in an endless expanse of darkness and evil magic, not knowing what you will stumble upon next, is worth reliving if you’ve been a fan of Emperor and Mortiis for all this time, and worth experiencing if Mortiis’ early releases are unfamiliar. Visit the webstore on Mortiis’ site for more remastered re-releases, special edition releases on colored vinyl, and a few gems by Vond. -Dave Wolff

Track list:
1.    The Song of a Long Forgotten Ghost

The Song Of A Long Forgotten Ghost original release
Posted by Dave Wolff at 10:09 AM