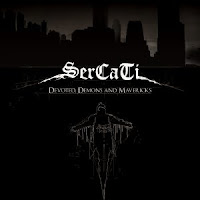 SERCATI
Devoted, Demons and Mavericks
Worm Hole Death
Place of origin: Liège - Verviers, Belgium
Genre: Melodic black metal
Release date: September 1, 2018
The Belgian band Sercati should be of interest if you like black metal with psychological horror in the vein of The Blair Witch Project and The Last Broadcast. Founding member Steve “Serpent” Fabry is hard at work developing the legend of a mysterious character known as The Nightstalker. An antihero of a sort, The Nightstalker is chronicled in print, on celluloid and by his bands Sercati and The Nightstalker. Devoted, Demons and Mavericks, the latest from Sercati, continues the legend along with a new book (The Nightstalker Newspaper -Tome 2) and film (The Nightstalker Case: Found Footage), all of which are available for purchase. According to Sercati’s official website, Fabry has had some formal education and worked in twenty bands. I’m coming into his story late but going by the new CD he seems to be putting his formal training and band experience to good use. While undeniably raw, with heavy distortion, rasping lead vocals and a primal attitude, Devoted, Demons and Mavericks feels like a well presented opus that takes itself seriously. Fabry approaches the material with all the seriousness of a conductor leading a symphony orchestra, and knows how to establish the setting to introduce his character to the listener. The introduction, nine tracks and outro take their time to convince you of their appeal rather than overwhelm you from the start. The other members have as much input as Fabry when it comes to constructing Sercati’s sound. Guitarist Simon Chandler and drummer Yannick Martin have had their share of formal training which they bring to the formula. Adding their experience to the writing and recording gives Devoted, Demons and Mavericks shades of thrash, prog metal and pagan metal. The flutes in ‘Under the Velvet Mask’, the keyboards in ‘Dream Devourer’, the acoustic guitars and keyboards in ‘An Appointment Between Hell and Heaven’, the inventive guitars in ‘Cathartic Bomb’, the chant section and lead solos in ‘Before the Battle’ and the Gregorian-like chants in ‘Fight to Dust’ are all fine examples of how these styles fit together, and how tightly they’re worked into the musicianship. Each song has something different to offer, which keeps things from becoming too redundant. The band’s site also has enough background information on the Nightstalker legend to familiarize you with it before you check the album out. -Dave Wolff

Track list:
1. Countdown to Apocalypse (intro),
2. Shockwaves of the Countdown
3. Time of Loss
4. Under the Velvet Mask
5. Dream Devourer
6. An Appointment Between Hell and Heaven
7. Cathartic Bomb
8. Before the Battle
9. Fight to Dust
10. The Purgatory
11. Facing the Unknown (outro)