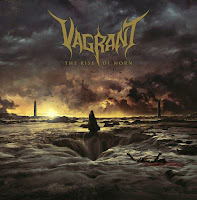 Band: Vagrant
Country: Germany
Genre: Epic melodic death metal
Full Length: The Rise of Norn
Label: Black Lion Records
Format: Digital, streaming
Release date: July 19, 2019
The Rise of Norn by Vagrant is performed by three pissed off German dudes who you can imagine are arranged around a massive campfire – they are drinking the blood of their enemies; they are drinking their beers and they are loving it. They play what is classified as epic melodic death metal and yeah, I tend to agree. I can also feel their music harks back to very early Dimmu Borgir and Cradle of Filth minus the showman ship, and y’all know how I love showmanship! So, they lost a few points for that BUT then I went and checked out their Discography. I noticed there was a problem as this was their debut album. Holy shit balls! This is their first album! Fornicate me like a sacrificial goat! So, I went to the website and recorded a problem – need more music please. Hopefully this gets fixed soon. Is it worth a listen? Yes. Is it metal? Yes. Is it unique? No, but don’t take that to heart because I’d rather it be a solid metal album that I can listen to rather than skipping tracks. I just would like a bands tracks to stand out from the pack. Speaking of tracks, I’d have to go with “Blood on a Crows beak” followed by “Blinded by Destiny”. Maybe its just me but I get the urge to run at the enemy across the seas and burn their villages down. Which coincidentally I nearly did with my local corner store and I would like to formally apologise now to the guy behind the counter who got freaked out and nearly called the cops while I was swinging a loaf of bread and growling like a man possessed. I explained what I was listening to on my headphones and as I felt bad, I bought a 2 litre of strawberry milk. He was cool with it yet still visibly shaken. The point is the music made me get out of the house and that’s a good thing. I am still watched very closely whenever I go to the corner store. So ya know, fuck it. I like this album. It’s not burning-church-worthy metal but the embers are there to start it, fire it up guys, looking forward to good things.
Rating: Several Loaves of bread and 2 litres of Strawberry milk out of multiple PTSD flashbacks for my Corner Store clerk.
P.S. The milk was out of date…shit. ☹ -Ghoul Shadows

Track list:
1. The Whispering Sea
2. Blinded by Destiny
3. Deceptive Similarity
4. Darkness During the Reign of a Black Sun
5. Spirit of Valor
6. Blood on a Crow's Beak