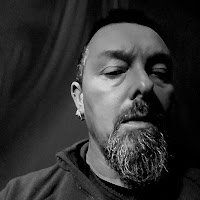 Interview with artist MARK TIZARD
Tell the readers about your Facebook group The Hidden Gallery and Redbubble pages Burning Ark and Black Planet.
I started my Redbubble pages twelve years ago, at first just to get some of my artwork onto shirts for my own use. I soon found out that other people liked what I was creating, and with a good online artist community Redbubble gave me the confidence to let people see more of my work. Around the same time the seeds of social media started to grow in the form of Myspace, so I started a Myspace page under the name Burningark with links to my Redbubble pages and started to sell my work for the first time. In time Myspace got swallowed up by the beast that is Facebook and after a few years of posting my artwork on other pages I decided to create one. The Hidden Gallery was born. I use the page to post a mix of old and new artwork and sell limited numbered prints and shirts of my work. My artwork is mainly of a dark nature so I coined the phrase “esoteric mythology” to describe it.
Is your Myspace profile still active since the upgrade to version 3.0? Do you think it was needed or not? How well was your profile doing before?
At one point I had maybe five Myspace profiles under different names to maximize my exposure to the world. It did serve its purpose for links to my artwork, but it could be frustrating getting links to work. My profiles had plenty of hits and with people from all over the world commenting on my art it was a good time. The reboot of Myspace was a dead duck right from the off in my eyes, Too little too late. I did seek out my Burningark profile a few years back, and it was strange looking in from the outside. It was a sort of out of body experience. I think it must still be out in the void somewhere.