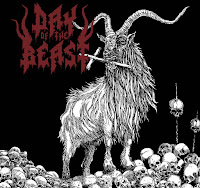 Band: Day Of The Beast
Country: France
Genre: Old school black metal
EP: First Invocation
Label: Independent
Format: CD (limited to 50 copies), streaming
Release date: December 29, 2018
The French black metallers Day Of The Beast formed in 2017 and released their debut EP “First Invocation” last December. My first impression of this release was that it had a consolidated, constant razor-sharp sound. The most obvious thing about DOTB is their inspiration to compose and lyricize came from Venom, Hellhammer, Bathory and other first-wave black and death metal bands. The same artists who influenced the likes of Mayhem, Witchery and The Crown from 1992 to ’99. On this EP strident, penetrating treble accompanies rank, putrid lyrics partly inspired by the exploits of the Marquis de Sade who was known for his erotic writings and extreme sexual fantasies. Granted I heard bands like this often between 1995 and 1999, but it comes across as young and invigorating as DOTB are newcomers to extreme metal. I wanted to find information about them as there was little to locate on their Facebook, Bandcamp and Youtube pages, so I had to click a couple of links and research more thoroughly. Sometimes it’s difficult to write about a band I just heard of without research to provide a broader picture by which to understand their mindset. Occult Black Metal Zine gave them a review and interview which helped in that regard. As much as that, the photos on Facebook showing the band bright and smiling were a contrast to the blasphemous and sadistic quality of the lyrics. This seemed to fit their statement that they’re not condemning Christians who choose to be Christians as much as they’re offering their point of view on religion. A point that still needs clarification in light of Hollywood’s persistent depiction of underground culture as juvenile, uncouth, indecent, small-minded and intolerant. Getting past that, you can appreciate “First Invocation” for what it is, not spectacular but a more than presentable jump-off to a black metal pilgrimage that will likely pervert minds and reap souls for the devil. -Dave Wolff