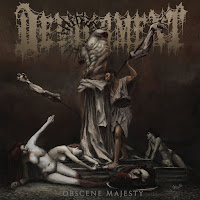 Band: Devourment
Location: Dallas, Texas
Country: USA
Genre: Slam death metal
Full Length: Obscene Majesty
Label: Relapse Records
Format: Digital, streaming
Release date: August 16, 2019
Devourment fans get ready for the barbaric beating that awaits your subconscious mind, get ready for this ferocious band's latest album, appropriately titled "Obscene Majesty".
Upon hearing the first track only two words came to mind, "Holy Shit!" As I continued to listen forward, I imagined a man being forced into a cage full of bloodthirsty lions. Now there's no question who will win this battle. The man will not survive of course, and the lions will most definitely rip him to shreds. These lions aren't your normal type of lions neither, they are supernatural if you will. You can hear their hungry roars with the devastating vocals that lay dominance over anything in their path. After this man having his entrails ripped out, he can see his innards, flesh, and guts recoloring these larger than life lions.
In other words, this album is graphically relentless. It is heavy-hitting, and it does not stop until these supernatural Lions have conquered man. Completely devouring him.
The album is overwhelmingly intense down to its last skin ripping second. The horror of this battle between man and an unlikely beast continued throughout, so vivid at times while listening, I can see stomach acid-spewing upon the beast blood-soaked fur.
It's very rare I say Holy Shit! Upon hearing the first few seconds of an album. But my friends, this work of treacherous art has definitely accomplished that!
If you are a fan of Grim Brutality that knows no boundaries, no borders, then this is the album for you!
Devourment's brand of Brutality on this Album is dead on. Brad Fincher's drumming is amazing, to say the least, from brutal start to brutal finish. thunderous, earth-shattering, riffs. This Album will pound your skull into pure white powder!
"Obscene Majesty" is Brutal Death Metal in its purest form. It's an electrifying rollercoaster ride from the bloody start, to bloody finish. We all know the lion can conquer man. Devourment gives a reminder of such with "Obscene Majesty". This Album puts the Brutal in Brutality! -Jeff Bennett