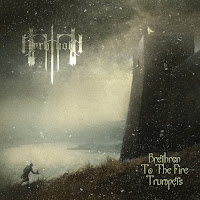 Band: Byrhtnoth
Location: Adelaide
Country: Australia
Genre: Dungeon synth
Full Length: Brethren To The Fire Trumpets
Label: Wolfspell Records (Poland)
Format: CD, streaming
Release date: June 21, 2018
The dark ambiance of Dungeon Synth subgenre has significantly evolved since its creation in the 80s, and this has been clearly demonstrated by Byrhtnoth Dungeon Synth project with the 2018 album “Brethren To The Fire Trumpets.” The artist behind this project is Liam ‘Baelathvan' Mohor, from Adelaide, Australia. And without doubt, what has been created is pure sophistication with blackened aesthetics in six stunning and moving tracks. Tracks which feel and sound less like a video game and more like a well-written and epic novel, one that is mature, captivating and showcases exceptional melodicism with a medieval and elegiac appeal.
Impressive soundscapes from the synthesizers glide over this album perfectly. Distant and faded blackened vocal tones provide impact with a sense of fantasy, fear, and wonder. Each track will carry you away, leaving an eerie and beautiful impression on the listener, one that often feels foreboding, prophetic and dramatic. While some tracks are instrumental, others such as "Between The Dawn Of Faerie And The Domination Of Men" are an anthem, a war cry to men and creatures heading to battle. This is a most ominous and atmospheric conception, in which Liam can be heard using his vocal skills to establish encouragement to a fight that feels victorious. This was a truly magnificent experience, which transferred emotion and power.
“Brethren To The Fire Trumpet” is large, theatrical and mystifying, with superb orchestral scores, emotive melody and a crawling black metal vocal style. To maximize the experience of this album, one should listen in solitude for a heightened appreciation of the musicianship and to travel to the battlefields of Middle Earth. -Kelly Tee