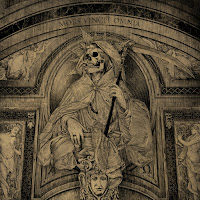 Band: Crimson Moon
Country: Germany
Genre: Black metal
Full length: Mors Vincit Omnia
Label: Debemur Morti Productions
Format: Die-cut digipak CD, vinyl (limited), streaming
Release date: August 30, 2019
Crimson Moon has produced seven albums since their coming together in 1994, with their 2019 release “Mors Vincit Omnia” being their latest. There is a reason these lads from Germany have the black metal community talking about and sharing the tracks off this incredible album. This is black metal, this is dark, atmospheric, unintentional emotive and sinters and is being called by many, one of the best albums of 2019. Take a listen for yourself and of course, you be the judge, however after I listened to this sheer brutal, nasty and blackened creation, I concur.
Crimson Moon has delivered an occult driven, evil and menacing sound, stained with an impressive and eerie atmospheric ambiance. As soundscapes of secular choir hymns feel like a subtle homage to Batushka, they are the perfect backdrop to the incursion of a spiteful and powerful vocal delivery from lead vocalist, Scorpios Androctonus.
Bringing a diverse vocal experience throughout this album, is guest vocal presentations from artists Ixithra of Demoncy, Proscriptor of Absu, Lord Angelslayer of Archgoat and Phaesphoros of Kawir. All of whom make their mark in blood copiously throughout this album and offer an excellent variance to the tracks, such as ‘Godspeed Angel Of Death’ and ‘Upon The Pale Horse’.
When albums such as “Mors Vincit Omnia” are released, it is hard to find words to justify such an incredibly black creation. This is an album resembling the thick stench of all things unholy, vicious and fearful with exceptional musicianship, creative and deep lyrical content and exemplary production.
Each track propels you, as the listener into the darkness with formidably heavy and seething riffs, punchy and weighted drum tracks and crushing melodies.
The first listen to “Mors Vincit Omnia” hooks and the second listen grows before the album evolves infinitely and becomes colder with each run.
“Mors Vincit Omnia” showcases synth and organ that sets the scene of a gothic cathedral full of all things sinful & unpleasant with an ambiance shrouded in mystery and iniquity as the vocal tones are hissing and skulking with scorn and contempt.
Crimson Moon released Canticles Of Dust in 2018, and in such a short time, you can feel the band's maturity, progression and diversity making “Mors Vincit Omnia” a very impressive effort, offering a dimmer and deeper artistry. These men have taken their signature sounds and amplified it.
Prepare to have shreds torn off your skin, and the hairs stand up on the back of your neck as you listen to the gloom and devastation of “Mors Vincit Omnia”. This entire creation is malevolent, grim and uncompromising black metal. -Kelly Tee