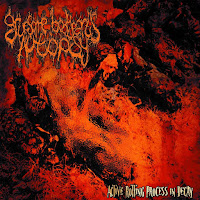 Band: Gruesome Bodyparts Autopsy
Location: Talca
Country: Chile
Genre: Goregrind
EP: Active Rotting Process In Decay
Label: Lymphatic Sexual Orgy Records
Format: CD-R, Digital
Release date: September 2019
Released on a split with Human Atrocity July 8, 2019
Today was pretty mundane. You know those lazy days where you barely move from the couch? Those days where showering seems to be a chore and leaving the house to go out within the grasp of winter's chill is simply out of the question? Yeah. Today has been one of those days.
Thankfully, before the night was through, I managed to stumble upon "Active Rotting Process In Decay" by Gruesome Bodyparts Autopsy! Just like that, my boring day was transformed, amazing goregrind being a catalyst for my change of mood. The splatter-grind vibes are very strong with this release, and I was almost instantly put in the mindset for gurgles, gargles, ping snares, and short bursts of audio madness masquerading as music.
As mentioned just above, gurgles and gargles are a focal point of this EP, with watery, pitched vocals permeating a genuinely putrid soundscape. I am reminded of Last Days of Humanity, or other clone-style bands such as First Days of Humanity and Golem of Gore. The "music" may not be of an entirely original style, but for goregrind purists, the vocals on this EP would without question tickle you absolutely pink.
Again, the guitar style and drumming is very reminiscent of LDOH, but when it comes to the guitar work, there seems to be a bit more structure to the riffs, as they are less of a blur than the frenzied, spastic playing of Last Days. As for the drums, the very popular "trash can" sound shows up with a vengeance, absolutely pummeling anything and everything in its wake!
As stated on Youtube, Gruesome Bodyparts Autopsy is a "bulldozing goregrind one-man band by Robert Myiasis from Talca, Chile since 2009. This is his latest EP, that came out as a split with Human Atrocity." It was released September 2019 on Lymphatic Sexual Orgy Records. So, you know what to do now. Order a fucking copy!
This release was one of the best (if not THE best) goregrind releases I have heard this year. It is only January, so hopefully this keeps up and my ears will continue to be righteously violated (in a good way) over the coming months. Absolutely exquisite, Robert! -Devin Joseph Meaney

Track list:
1. Introduction to Cataleptic Reflexes and Human Decomposition
2. Necrotic Bodyparts Barbecue
3. Feast of Dead Dogs with Honey Mustard and Sauerkraut in the Trash
4. Loss of Cadaveric Material Available
5. From Bloated to Dry
6. Squashed Algor Mortis
7. Active Rotting Process in Decay
8. Collection of Hemorrhoids
9. Insertion in the Vagina and Anus of Roasted Chicken Tongs
10. Compulsive Engorgement and Cannibalistic Devourment (Remake)
11. Mother and Child Shredded on the Road
12. Removal or Resection of the Entire Limb (Autopsy II)