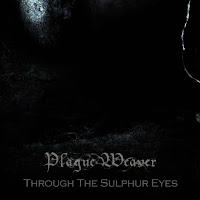 Band: Plague Weaver
Location: Mississauga, Ontario
Country: Canada
Genre: Black/doom metal
EP: Through the Sulphur Eyes
Format: CD, digital
Label: Independent
Release date: January 10, 2020
“Through the Sulphur Eyes” is Plague Weaver’s sophomore release, following a self-titled EP independently released in 2019. The band is the brainchild of Thorn who has far-reaching experience as a musician from working in Bisclaveret (Poland), Azarath (Poland), Mastabah (Poland), Aspergillus Flavus (Poland) and Damnation (Poland). He puts this experience to good use, with a special percipience of the inherent heaviness of death metal and the response it evokes in the listener. His strength here is his ability to utilize repetition to create an overwhelming musical climate full of noisome ambience. Rather than write progressions that slowly construct their songs to their logical progression, the band proclaim their purpose from the outset, opening each track with enough volume and distortion to push them to indurate levels. “Through the Sulphur Eyes,” the title track of the EP, starts with a painfully slow rhythm with melody, hypnotic guitar leads and a hint of atmosphere, somewhat similar to old Paradise Lost except for the layered vocals. There are also indications of Swedish melodic death metal a la Hypocrisy, At The Gates and In Flames. The song is a decent introduction to Plague Weaver if you missed their debut EP. It’s tastefully reiterative, with guitar progressions that are gritty and minimalist but delivered with clarity. The songs that follow, namely “The Traveller,” “Descent” and “Unchained,” have a necrotic effect on your mind rather than a bludgeoning effect, dissolving your brain with leisurely forbearance, eventually becoming bedevilling hymns to desolation and perdition. Apparently, the best song was saved for last as “Alchemy” presents the conclusion to the doom-laden tale that is “Through the Sulphur Eyes”, with slow, dissonant riffs, leads sounding based on minor notes and an apocalyptic feel that eats away at the last or your mental resistance. “Through the Sulphur Eyes” is majestic without being overblown or pompous, touching you on a distinctly intimate level. -Dave Wolff