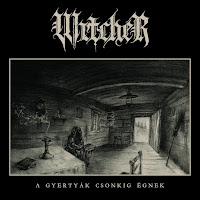 Band: WitcheR
Location: Szombathely, Vas
Country: Hungary
Genre: Atmospheric Black Metal
Full length: A gyertyák csonkig égnek
Label: Filosofem Records
Format: CD, digital
Release date: November 1, 2019
WitcheR is an atmospheric black metal band from Hungary comprised of members of Vrag and Trollheimen (also from Hungary). “A gyertyák csonkig égnek” (roughly translated as “candles burn to the stump”) is bereaved, doleful black metal replete with keyboards, piano, and atmosphere, conceiving harmony between the organic and elemental, between rawness and texture. As their third full length (after 2015’s “Csendes Domb” and 2012’s “Néma gyász”) it illustrates great capability for a band consisting of two musicians who are just starting to grow accustomed to each other as musicians (Roland Neubauer and Karola Gere). It doesn’t take much effort to realize they committed infinite consideration into what they were writing for this album. It’s depressive but nevertheless authentically graceful and resplendent in its execution. So abundant with passion, sadness and vehemence it shows these two have potential to compose orchestral albums if they decided to work with additional musicians in the future. Or something like the black metal equivalent of chamber music if they remained consolidated to a handful of musicians. This statement can be substantiated by their moving cover of Pyotr Ilyich Tchaikovsky’s “A hattyúk tava.” The guitars by Neubaure exist as a foundation for Gere’s keyboards, not pushed so far into the background that they sound secondary to everything else here. Neubaure’s schematic playing contrasted with Gere’s grounds the material firmly in its black metal roots while heightening its byzantine, expressive side. The percussion sounds slightly concealed behind this, but it’s a minor setback that can be easily corrected on the next full length. The lyrics are penned in Hungarian but another rough translation on the net led me to discover they’re as profound as the musicianship. They represent a deeply personal struggle between transgression and deliverance. It sort of struck me as an entreaty from somewhere in the beyond to disappear within oneself and find innocence that was buried inside long ago, buried and forgotten but not completely forgotten. This gives the album optimism that is unexpected for such a funereal album but nonetheless fits. -Dave Wolff