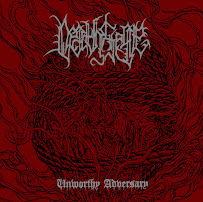 Band: Deathsiege
Location: Tel Aviv Yafo
Country: Israel
Genre: Blackened death metal
Demo: Unworthy Adversary
Format: Digital
Label: Independent
Release date: April 17, 2020
On their second independently released demo this Israeli black/death metal band waste no time getting their point across. The seven tracks recorded for “Unworthy Adversary” are irredeemably raw, filthy, offensive, primal and most of all brief. Their delivery and brutal production is exclusively for depraved souls who listen to early Sodom, Sarcofago, Archgoat, Impaled Nazarene, Profanatica, Beherit, Blasphemy, even the first Emperor demo. On this as on their debut demo “Cannibalistic Patricide” (both are streaming on Bandcamp), Deathsiege recall a time when extreme metal was cult before there was “kvlt.” The irredeemably unclean hallmark of their material is given additional weight by the lyrics, as Deathsiege see a world made incurable by atrocious, barbaric deeds committed by the human race in the last century, and in times long before that. These songs present an overwhelmingly pessimistic perception of humanity, an unsparing observation of what humanity has come to after all those years of intolerance and bloodshed. “Hope leaves the mind/through dying eyes/unable to show tears of pain in water” from the first track “Drowned by Murderous Force” is the first indication that the band see little chance that our situation will somehow improve considering man’s propensity for savagery. “Victimized by evil/you will know the taste of a life desecrated by power” seems to describe how things will eventually end. Think of George C. Scott’s speech toward the end of “Exorcist III: Legion” and this is basically the message the band seeks to relate to the unsuspecting listener. This is imparted through a hoarse, staccato chant and a soundtrack of early death metal guitar and bass, frenetic blast and fills and chaotic solos. The blood red cover artwork (by Jessica Astral Odyssey) of a world in bondage through which flame or smoke is escaping the destruction beneath is a simplistic yet graphic forewarning of the apocalypse within, in which extinction is the logical conclusion. –Dave Wolff
Lineup:
J.S.: Vocals, guitars
A.M.: Guitars, drums
Track list:
1. Drowned by Murderous Force
2. Poisonous Worlds
3. Dolor Aeternam
4. Unworthy Adversary
5. Infiltrate Victimize Exemplify
6. Siege of Death
7. Victorious Dead
Posted by Dave Wolff at 9:45 AM