Full Length Review: Ancient "Back to the Land of the Dead" (Soulseller Records) by Dave Wolff 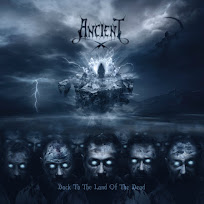 Band: Ancient
Country: Norway
Genre: Black metal
Full Length: Back to the Land of the Dead
Format: Digital Album, Jewel case edition CD, gatefold double vinyl
Label: Soulseller Records (Netherlands)
Release date: March 30, 2018
One of Norway’s premier black metal bands since 1992, Ancient disappeared after releasing their 2004 full length “Night Visit” and 2005 demo comp “Eerily Howling Winds: The Antediluvian Tapes”. Doing an impromptu Bandcamp search I found their new full length “Back to the Land of the Dead” and it was like unexpectedly meeting an old friend. Founding member Aphazel is still the driving force behind the band after their thirteen year hiatus; after a period of experimenting with gothic black metal, he makes a real effort to return to form, as on their 1993 demo “Eerily Howling Winds”, ‘94 debut album “Svartalvheim” and ‘95 EP “Trolltaar”. “The Cainian Chronicle” from 1996 was another fine moment for Ancient as they could grow and keep their old rawness. While their goth/black metal period was decent, I wouldn’t completely discount the disillusion expressed about it. I gravitated toward Ancient’s early releases with the most exuberance as they represented the band at their most unrestrained. I initially didn’t know what to expect from “Back to the Land of the Dead”, but as the opening strains of “Land of the Dead” faded in I was grateful for something I could sink my teeth into again. This album is not exactly as coarse and unruly as their older releases, but they come close despite the moderate flaws. I’d even say songs like “The Empyrean Sword”, “The Ancient Disarray”, “Defiance and Rage” and “The Prodigal Years” are an improvement; particularly the acoustic sections which show loads of sophistication without over-stating the point. The percussion tracks sounded a little too thin for the songs, and there could have been more atmosphere to accommodate those acoustic sections, the inclusion of horn sounds and chanting, but the guitars retain the bite Ancient displayed in the old days. “Occlude the Gates” has some impressive soloing and lead harmonies on top of this, there’s a classical feel in “”The Spiral”, there’s blast in “Petrified by Their End”, and as an added bonus there’s a cover of Bathory’s classic “13 Candles”. Many of the lyrical passages seem to indicate a desire to rediscover the pagan countryside and the gods the band celebrated, and wonderment of, if they’re found again, they can experience a full rebirth. Overall “Back to the Land of the Dead” is an example of how Ancient could and should have progressed in the second half of the 90s, and does a good job picking up where they left off in ’96. –Dave Wolff
Lineup:
Zel: Vocals, guitars, keyboards, songwriting, lyrics
Dhilorz Guitars, bass, songwriting, lyrics
Nick Barker: Drums
Track list:
1. Land of the Dead
2. Beyond the Blood Moon
3. The Sempiternal Haze
4. The Empyrean Sword
5. The Ancient Disarray
6. Occlude the Gates
7. The Excruciating Journey, Part I: Defiance and Rage
8. The Excruciating Journey, Part II: The Prodigal Years
9. The Excruciating Journey, Part III: The Awakening
10. Death Will Die
11. The Spiral
12. Petrified by Their End
13. 13 Candles (Bathory cover)