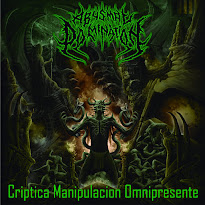 Band: Abysmal Domination
Location: Pasto, Nariño
Country: Colombia
Genre: Brutal death metal
Full Length: Criptica Manipulacion Omnipresente
Format: Digital album (Independent), CD (Tribulacion Productions), T-shirt/CD (Tribulacion Productions/Sevared Records)
Label: Independent, Tribulacion Productions/Sevared Records
Release date: Released independently July 4, 2020
Released on Tribulacion Productions July 16, 2020
Colombian death metal strikes again, and this time there is no chance of survival. With its growing legion of brutal and extreme bands, Colombia is poised to become recognized on a global scale. For four musicians who just released their debut, Abysmal Domination are likely to break into the U.S. label industry. The Lovecraftian cover art of “Criptica Manipulacion Omnipresente” promises nothing short of flawless brutal pandemonium. Abysmal Domination’s debut displays enough stringent, maniacal caliber and schizophrenic musicianship to instantly convert to their sacred mission of dominating extreme music in Colombia and beyond. I am floored by their influential range, especially guitarist Alexander Olaya who handles lead and rhythm duties. His work establishes Abysmal Domination’s sound as exclusively theirs, and extremely difficult to compare to that of other bands. Through “Sistema Putrefacto y Esclavo” and the following songs, Abysmal Domination careen through long successions of progressions and time changes, successions more liberally written and arranged in each track than you’ve heard from death metal bands. In many instances the guitars display such complexity and orchestration that they reek of classical training. The guitars and drums (Cesar Lopez) are mixed to really push the band’s agility and nimbleness. The only drawback to this is the bass tracks (Harold Gomez) generally tend to be buried under the cacophony this creates. There are exceptions such as “Infierno Interno” but I can imagine how much heavier and more brutal this album would have sounded if the bass was given more attention in the mixing and mastering. It almost would have sounded too heavy and brutal. I can always count on brutal vocals from a Colombian band and AD deliver in this department as much as in the others I described. Andres Pabon’s guttural roar is deep and throaty enough to contend with the likes of Barney Greenway, Glen Benton and David Vincent, and it never wavers no matter how much energy he puts into it. If you are looking for death metal with its intricacy and brutality taken to the next level you’d do well to check this out. –Dave Wolff
Lineup:
Andres Pabon: Vocals
Alexander Olaya: Guitars
Harold Gomez: Bass
Cesar Lopez: Drums
Track list:
1. Sistema Putrefacto Y Esclavo
2. Grotesca Programación Monarca
3. Infierno Interno
4. Implacable Genocida Beligerante Y Perpetuo
5. Siniestro Sacerdote Pedófilo
6. Homosapiens Origen Del Horror
7. Abysmal Domination
8. Saciándome Del Nefasto Placer
9. Portal Del Engendro Séptico
Posted by Dave Wolff at 3:11 PM