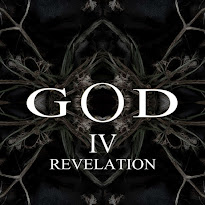 Project: GOD
Genre: Multi-layered progressive metal
Full Length: GOD IV – Revelation
Format: Digital album
Label: Independent
Release date: July 14, 2020
(Released on Bandcamp June 1, 2020)
This is the second all-instrumental album I’ve listened to in a row (the first being Mute The Saint’s brilliant self-titled debut), and my appreciation for instrumental albums is experiencing a reawakening of a sort. Something that remained foremost in my mind as I listened to the prog-instrumental metal band known as God is that the band and the driving force behind it go simply by this moniker. I recall more than a handful of ego jokes while remembering how many musicians have been referred to as God since the eighties. However, I’d concede this musician can be excused for the hubris as he surprisingly pushes prog-instrumental metal to new creative lengths on “God IV – Revelation.” This conceptual double album, based directly on the apocalypse from the Book of Revelations (all twenty-two chapters), straightforwardly puts across the amount of planning and work that went into the retelling of the Book of Revelations, giving it the feel of a full production. It may be ironic that a project fueled by traditional Christian themes of good and evil is broadening the range of progressive metal, but hearing it for yourself you’ll see how justified the favorable reviews actually are. I have no idea who this guy is, nor did I know what to expect before checking this album out, though I read he’s been establishing himself since he started releasing material in 2016 (also that his previous work is less brutal and more light-filled than it is this time around). I approached “God IV – Revelation” in the spirit of fairness and found it rewarding. God’s vision and dedication go through the roof as he creates distinct personalities for Armageddon’s key players. His songwriting, execution, passion, and zeal gives both characters depth and breadth according to the varying sounds, varying atmosphere and varying intensity presented in each chapter. And his depictions of light and darkness can easily rival concept albums from other, more well-known bands, metal or rock. To come of age after four or so years and record a concept album with so much balance between dark heaviness, crunch, ambiance, and complexity suggest this project is well on its way to achieving high status in the 2020s. It was suggested that topping an album of this immensity may be close to impossible, but whether God has reached the peak of his abilities remains to be seen. –Dave Wolff
Track list:
1. Revelation
2. Throne
3. Lucifer
4. Hell
5. Beast
6. Humanity's Number - Six Hundred Threescore And Six
7. 7
8. 144,000
9. Tribulation
10. Repent
11. War
12. False Prophet
13. Antichrist
14. Abyss
15. Messiah
16. Reign
17. Judgement
18. Book Of Life
19. Lake Of Fire - The Second Death
20. New Heaven, New Earth, New Jerusalem
21. Eternity
22. Amen