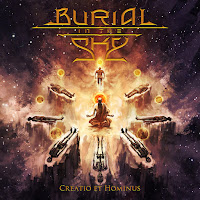 Band: Burial In The Sky
Location: Philadelphia, Pennsylvania
Country: USA
Genre: Progressive technical death metal
Full Length: Creatio Et Hominus
Format: Digital album, CD, purple translucent vinyl
Label: Independent
Release date: June 1, 2018
If you thought you heard all there is to hear from death metal, I challenge you to give Burial In The Sky a chance. The Philadelphia act brazenly incorporates psychedelic progressive rock into “Creatio Et Hominus”. If Death collaborated on an album with Marillion it might sound something like this… or maybe not.
Anyway, you would hardly expect any crushing musicianship to follow the instrumental introduction “Nexus”, a noirish piece preparing you for a quiet metropolitan evening. Then the next track “Tesla” hits you quite unexpectedly with the most guttural vocals and downtuned guitars you can handle. This brutality is artfully contrasted with trippy, atmospheric guitars, piano, saxophone, mandolin, kalimba and radical mood changes illustrating life’s complexities.
In no way is this elitism from a band viewing deviation as pretentious, nor is this a musical preachfest demanding change and belittling you intellectually. Burial In The Sky equally respects both forms of expression, as they grow organically from each other in all the complexity they display, and they intend for you to feel every perception of reality contributing to a more complete world view. All subtle nuances of existence are given credence; through the rest of the album, and the band invites your openness without trying to instill anything into your head.
“Creatio Et Hominus”.makes a statement that everyone has the potential to evolve on their own terms. Even more surprising is, during the writing and recording of this album the band found the songs were assuming a life of their own, progressing beyond their expectations and becoming far more artistic than they thought they would turn out in the beginning. It surprises me that I discovered this album by chance and was greeted with such a profound statement.
The band has a new album coming out on Rising Nemesis Records this month, and I’m more than curious to hear what they’ve pieced together. They said they’ll be taking what they’ve done here further, with even more creativity and intensity. –Dave Wolff
Lineup:
Jorel Hart: Vocals
James Tomedi: Guitars, Slide, Keys, Mandolin, Kalimba
Zach Strouse: Bass, Saxophone
Sam Stewart: Drums, Piano
Jimmy Murphy: Vocals on “Tesla”
Brody Uttley: Guest Solo on “Creatio et Hominus”
Track list:
1. Nexus
2. Tesla
3. Nautilus' Cage
4. The Pivotal Flame
5. Psalms Of The Deviant
6. 5 Years
7. Creatio et Hominus
Posted by Dave Wolff at 8:41 PM