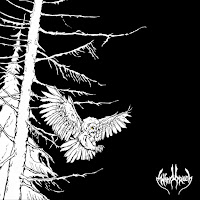 Band: Windbruch
Location: Nizhnevartovsk
Country: Russia
Genre: Atmospheric black metal
Full Length: No Stars, Only Full Dark
Format: CD, digital album
Label: Hypnotic Dirge
Release date: February 1, 2014
The Russian city of Nizhnevartovsk is characterized by long winters, early autumns and late springs. This sounds like a fitting location for a band like Windbruch and their style of black metal, which includes atmosphere, depressive vibes and elements of post and prog. “No Stars, Only Full Dark” was recommended to me by Daniel Ryan of Transylvanian Forest Ezine and (more recently) the net radio program Dan’s Block Featuring DJ Chaos, and it’s as fitting a harbinger for the coming of autumn.
This was released back in 2014 and as far as I know they haven’t released anything since. It’s not your typical black metal album though no one can say what typical black metal is anymore. As a stand-alone release it doesn’t sound exactly like anyone else despite the slight similarities to Burzum, Sear Bliss, Limbonic Art and Deafheaven. “No Stars, Only Full Dark” has dusky overtones and a feel of vast emptiness, it’s clear and polished with as much soothing melody as depressive presentiment. Rather than diminish its darker angles it brings them out making them much more profound, imposing and encompassing.
I’ve never heard this band before today but already I’m starting to realize why “No Stars, Only Full Dark” draws people into the band’s world so easily at first listen. It comes closer to the majestic beauty in darkness than what most BM bands achieved in the 1990s. The band is the brainchild of a solo musician who goes by the name Rodion. In his songwriting he displays a certain obsession with what’s dark, repetitive and hypnotic. He doesn’t exactly surpass what Count Grishnackh did, but Rodion clearly makes an effort to take it into new directions, adding new elements to give his hypnotic dynamics elevated levels of intensity.
One example of what I mean is the track “No Stars”, which marries chimes, dissonant, droning guitars, intricate percussion and waves upon waves of keyboard sounds to paint a mural of futuristic desolation that’s simultaneously forlorn and dazzling. It results in a feeling likened to Ray Bradbury’s short story “Kaleidoscope” and for clarification of what I’m referring to you’ll have to read it for yourself. The track “Only Full Dark” is built on more ethereal keyboard sounds, thriving on slow rhythms and haunting spoken word parts to permeate your soul before taking turns into musical territory that’s even darker and emptier. It’s a shame Rodion hasn’t pursued his vision further since “No Stars, Only Full Dark” shows he was on to something. Maybe in the near future he’ll start writing new material to build on what he accomplished here. –Dave Wolff
Lineup:
Rodion: Vocals, all instruments
Track list:
1. The Dance of Liquid Fire
2. No More Entry, No More Exit
3. No Stars
4. A City on Fire
5. Only Full Dark
6. Neswa-Pawuk
7. Flashback to my Lake
Posted by Dave Wolff at 5:07 PM