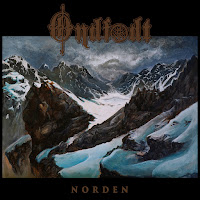 Band: Ondfødt
Country: Finland
Genre: Black metal
Full Length: Norden
Format: Digital album, jewel case CD (limited to 1000 copies), standard black vinyl, opaque cyan blue vinyl, solid white / opaque cyan blue swirl with black splatter vinyl
Label: Immortal Frost Productions
Release date: July 30, 2021
From the stable of Immortal Frost Productions comes this hateful beast by Ondfødt. This is some grim black metal in the old-school vein. It’s a hammering affair with some relentless drumming. When these guys go into high gear they absolutely pummel. But even better, the guitars have a fair amount of variety to them with some melodic parts and of course the heavier alternate picking riffage with some tasty and memorable hooks thrown in. I have to say some of the melodic bits and guitar solos are rather tasty as well!
Musically this is rather good despite the 'grim' black metal production values on this release. I think the production whist being a little on the 'necro' side of things really adds to the recording, though I'd understand if some people found it a bit hard to listen to. It really showcases the buzzsaw sound of the guitars rather well, and suits the vocals too I have to say!
If you were a fan of early Mayhem or Dark Funeral this should interest you. Playing-wise this is much more varied than the above two reference points. Maybe if you threw Bathory albums into the mix you might have a fairer comparison of where these guys are at. I have to give these guys points for focusing on the songwriting rather than just trying to be extreme for the sake of it. Overall I have to say I really enjoyed this one! Keep it up, guys!
Make sure you give the guys a like on Facebook or buy / stream their stuff on Immortal Frost Productions. –Reggae
Lineup:
Owe Inborr: Drums, guitars, bass, vocals
Juuso Englund: Guitars
Track list:
1. Höstdröm
2. Höstfurstin
3. Han Bor I Skuggona
4. Gifti Från Tadjin
5. Fyri Do Dör
6. Mörkri
7. Ti Dödas Viso
8. Natten
9. Norden
Posted by Dave Wolff at 8:00 PM