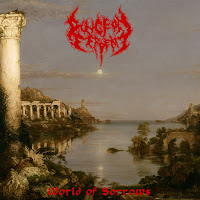 Band: Dungeon Serpent
Location: Vancouver, British Columbia
Country: Canada
Genre: Melodic death metal
Full Length: World of Sorrows
Format: Digital album, limited edition CDs
Label: Nameless Grave Records (USA)
Release date: July 16, 2021
This is some seriously underground metal. From the outset, it’s pretty much flat-out black / thrash / war / grind metal. But don't let that fool you. After the initial onslaught, some more varied influences start to appear. It's a little more difficult to pigeonhole these guys as it sits somewhere between Blasphemy, Terrorizer (old) and maybe old Incantation, Sarcofago, Bolt Thrower and a couple of Aussie bands like Abominator and Bestial Warlust... you get the idea.
The recording is grim and underproduced, but on closer listen these guys are really quite skilled. Dungeon Serpent combines a few genres of extreme metal into one unholy package. I don't tend to review individual songs but after the initial barrage of noise / extremity on the first track some really tasty black metal riffs kick in.... with some Slayer-esque solos. This isn't just stock standard war metal either, the lads have railed in influences from different genres of metal to create something at really stands apart from its peers. As it goes on some rather tuneful solos appear but the heavy as f--k riffage is a constant. These guys are brutal!
Guttural vocals and absolutely hammering drums. Some wicked double kicks that pepper the whole release from start to finish. The alternate picking present on this album is nothing short of brutal. If you like this stuff then I can only implore you to give this a fair listen. To the lads, I hope you guys get a lot of plays and a lot of sales on this, this is a short but sweet release, and one of the more extreme releases I've heard in a while. I know this is supposed to be grim disturbing black metal, but I have to say it really brightened my Sunday! Basically, I’m kicking back with a beer and reveling in the extremity and classic brutal riffage this release has brought. It actually makes me happy there are still people making music like this. -Reggae
Lineup:
Arawn: Guitars, vocals, bass, compositions
Track list:
1. Necroscope
2. Decay
3. Immortal Incubation
4. Cosmic Sorcery
5. World of Sorrows (Instrumental)
Posted by Dave Wolff at 10:52 AM