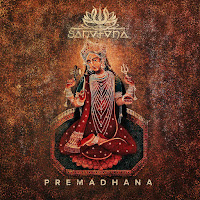 Band: Sanatana
Location: Kharkiv
Country: Ukraine
Genre: Metal, new age
EP: Premadhana
Format: Digital album, limited edition digipack CD
Label: Independent
Release Date: September 29, 2021
Wow, just wow.
You know, you think you’ve heard it all? That’s the narcissist in me thinking in my tiny 27 years alive that I’ve discovered all that music can throw at me, that I’ve ‘heard it all’ as the expression goes. This album is the righteous kick in the face I needed to remind me that no matter how much I uncover the ‘undiscovered’ will always reign supreme.
SANATANA -PREMADHANA
So, this is the latest album by the Ukrainian band! Featuring five (I assume) brand new tracks.
Look, I’ll play devil’s advocate here and say that I know absolutely nothing about Ukraine or their music but after today I’ll definitely be on the lookout for more because this is one of the most interesting albums I’ve heard all year!
This thing is an interesting combination of Folk, Metal, spiritual meditation? Seriously this thing is a bizarre fusion of sounds that make me want to meditate while simultaneously rocking my head back and forth at the vibes this thing is giving off, I mean as stated above ‘wow’.
There’s something very ‘spiritual’ about this album as I stated already, it’s the way the folk-like dreamy instrumentation and production go hand in hand with the very surreal and overwhelming vocal performances which complement the sonic aesthetic beautifully.
I love how ambient this album sounds and feels without having much associated with that genre at all, they utilize the attributes of folk, indie and metal to create this ‘experience’ that can only be described as ‘heavenly’.
Now keep in mind, I don’t understand the lyrics at all so I have no idea what message they are sending to the audience, for all I know they could have had no intention at all of spirituality or meditation or anything like that, this is just how it is perceived to me and I can only be honest with how I hear it and to me it sounds like a reinterpretation of what I would expect to hear at a mosque or holy ground in different countries around the world.
I know I say this a lot on here but this five-song tracklist will definitely not be for everyone but I say ‘why not?’ That’s how I approach music and that’s how and why I discover so much interesting and unique sounds!
Don’t get me wrong, not every band or artist I discovered is good but it’s the journey of just saying why not and taking a chance to try something new and see if you like it!
I ask you all, give this album a try and let me know what you think! I guarantee you, you won’t find another album like this possibly in your lifetime! –Corban Skipwith
Lineup:
Jurgis: Vocals, guitars, percussion
Roman Kucherenko: Bass
Maha Shakti: Vocals, keyboards
Viktor Vrajendra: Additional vocals
Track list:
1. He Govinda, He Gopala!
2. Bhajahu re mana
3. Sikshashtaka
4. Hari Hari Biphale (Wasted Life)
5. Chinnamasta
Posted by Dave Wolff at 11:51 PM