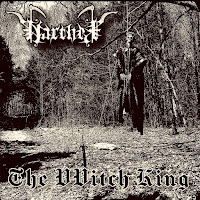 Band: Narthex
Location: Elizabethtown, Kentucky
Country: USA
Genre: Blackened doom metal
EP: The VVitch King
Format: Digital
Label: Independent
Release date: May 13, 2022
Founded in Kentucky, USA last year, Narthex released their third EP after “Narthex” and “Fallen Lords and Kingdoms”. The story is an ancient one, inspired by Tolkien's classic “Lord of the Rings” saga. The main character of "The VVitch King" is a servant of Sauron, the ruler of Mordor in “Rings”, a necromancer in “The Hobbit” and the chief lieutenant of Lord Morgoth in “The Silmarillion”.
Although Tolkien did not believe in absolute evil, he nonetheless depicted Sauron as the close a character could come to absolute evil, while depicting the forces of good as being capable of erring and failure. Sauron was often compared to Bram Stoker's "Dracula"; he was further compared to a Celtic folklore legend known as Balor, leader of malevolent beings known as the Fomorians. Considering this, it makes sense that a black/doom metal band would draw inspiration from Tolkien’s personification of evil.
A lone horn instrument launches "The VVitch King" into its olden twilight, announcing the coming of shadow and introducing you to the antagonist immediately afterward. We do not learn his name, only that he is an ancient king, an undying sorcerer who has endured years of obscurity and plotting and is now at last able to conquer. King after king falls before him as he claims his throne in preparation for a war to take the land of Agbar. The appeal of the antagonist’s introduction is simplicity itself as the tale begins.
While displaying a doom metal vibe reminiscent of Black Sabbath, Narthex displays a raw black metal sound similar to Maniac Butcher, Throne Of Ahaz, The Abyss, and The Black. As I was surveying the guitar sound and the production in general, all these bands from the 90s came to mind. Despite how often I say this, I think it is fitting because the razor-sharp/sandpapery qualities of the guitars are quite recognizable. I also noticed how the bass lines drive the songs, complementing the guitars in an innovative, exciting way.
I don't want to give away the story beyond the first song, but if you're familiar with Tolkien's world, you know how it unfolds and eventually ends. It's a tragedy for the antagonist, but there are hints that the evil will survive in order to plot his return to retake the lands he lost. For their simplicity, Narthex are able to deliver the story of a classic saga as convincingly through their music as they are through their lyrics. "The VVitch King" is a good example of less is more and building songs from the basics. –Dave Wolff
Lineup:
Magus: Vocals
The Black Wizaard: Guitars
Dazaran Mog: Bass
Mutilator: Drums
Track list:
1. The VVitch King
2. Cells of Hollow Hand
3. Narthex
4. Fall of the VVitch King
5. The VVitch King (acoustic)
6. Gospel of Magus
Posted by Dave Wolff at 4:17 PM