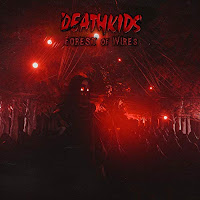 DEATHKIDS
Forest Of Wires
Independent
Place of origin: New York, USA
Genre: Progressive death/black metal
Available on iTunes and Amazon
Graphic novel available through their official site
Release date: October 7, 2018
Deathkids started as an under-15 band years before Babymetal and was a prominent band in the Long Island death metal scene from 1994 to 1999. I have followed them from the beginning to the present and they’ve gone from what would be perceived as a novelty band to legitimate artists. They personified the independent spirit of the underground, releasing several demos and CDs on their own label, doing interviews for local zines (this one included), performing often in New York and Long Island and making festival appearances around the country. For an unsigned band, they were doing quite well until they inexplicably disbanded, but this is not to say they didn’t abandon playing altogether. Core members Harley and Kenny Wooton resurfaced in 2003 with Inred, releasing four full lengths and an EP over eight years. These showed remarkable evolution for them as musicians and songwriters. Fast forward to 2018 and we have a brand new Deathkids album which is being released and distributed independently. The band appears to have their act together regardless of the changing standards in the industry, and their new album demonstrates overwhelming advancement musically, lyrically and conceptually. For an album that’s only sixteen minutes in length Forest Of Wires goes beyond anything they composed as Inred. That Forest Of Wires is a completely DIY undertaking is all the more reason it deserves attention. The songs here are progressive fusions of death and black metal with goth, industrial and electronica. What’s more they are part of a larger narrative, featuring promotional videos and a graphic novel likewise released independently. Set to a quasi-futuristic background representing the idea that technology has completely taken over human life. Harley Wooton said this is not an album in the traditional sense, but more like a film and musical. It is meant as a challenge to how people consume music in this day and age. The songs fall between one and two minutes in length, and the material crammed into them really must be heard to be believed. The band’s music has progressed exponentially since the 90s; this album is even beyond those by many bands who have consistently written and composed for a decade. The videos are beautifully done and illustrate the songs in new and inventive ways. I haven’t read the graphic novel yet but I imagine it does the same and draws you even further into the story. Forest Of Wires is an ambitious project and its presentation could represent a step forward in telling conceptual tales through music and visuals. -Dave Wolff