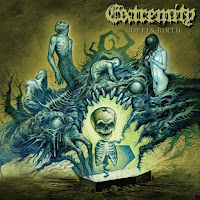 EXTREMITY
Coffin Birth
20 Buck Spin
Place of origin: Oakland, California, USA
Genre: Death metal
Release date: July 20, 2018
Available in CD, cassette and vinyl format and at 20 Buck Spin’s website
Dear deads, get up from your raw graves and listen to the heavy, cruel death metal of EXTREMITY from Oakland, California, USA.
Members of Vhöl, Agalloch, Vastum, and Cretin came together to write one of the best classic death metal albums I have heard this year. Recorded at Oakland’s Earhammer Studios, the birthplace for so many of today’s standout death metal releases, Coffin Birth became an interesting reason to remember what albums should be - a real heavy, rotten and breathing with rage death metal attack.
The album begins with a canonical, horrendous horror synth with an anxious mood and brilliant eerie aesthetics, then a very groovy doom death metal atmosphere takes your soul. The alternating, bone grinding slow riffs aren't separated by anything compositionally, from sudden blast-beats under which guitars follow a simple, brutal manner. Slow parts are given out as are doom parts with long guitar work, seeming almost melodious after the fast songs. This alternation perfectly diversifies what is not the most difficult music, leaving no place for boredom. Impervious sounding guitars, as of old, both playing complementary rhythm guitar parts with rare melodious deviations, a booming monotonous bass and the animalistic, hoarse roar of the vocalist trample the listener into the ground.
The particulars of Coffin Birth may not be that apparent for those without a head for the genre; this isn’t a record to pull you from your power metal pulpit. But Extremity are not attempting to reinvent the death metal wheel. Rather, they aim to exemplify it with as much evil exuberance as possible. Actually I have special sympathy for Marissa Martinez-Hoadley, the band’s guitarist and vocalist who said in a 2017 interview for Vice that she never thought that she could create music by herself. Great try, Marissa. I’m looking forward to her next steps on the path of death metal.
My favorite track is the Misbegotten/Coffin Death, the last track of the album, which contains the quintessence of its spirit and ideas. The composition encompasses a rich proportion of expression from acoustic interludes to deadly low-frequency attacks rushing into your ears. Murderous rhythms, groove metal riffs and furious vocals flow from one to another well It is especially nice when the group so skillfully arranges doom passages from the old cheekbones of death metal. The female vocals at the end, with synths and noises, - are amazingly beautiful in its completion of this album.
Recommended for fans of old school death metal with doom passages, epic solos and blast beats. Listen to this album, and you will understand that even girls also know how to forge metal as it should be forged! Coffin Birth from Extremity is a perfect ode to death metal’s cult and prove that death metal is still very much alive. -Serafima Okuneva