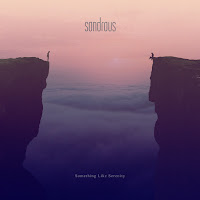 SONDROUS
Something Like Serenity
Independent
Place of origin: Cape Town, South Africa
Genre: Ambient post-rock
Release date: September 3, 2018
This album is to listen to if you want to mellow out from time to time. It’s extremely tranquil and somber, forming a conceptual narrative that doesn’t sound too grandiose, with lyrical passages as a cathartic experience of sorts. Gideon Lamprecht and Jaimie Hull, the core of Sondrous, have been working together since March. Their debut album Something Like Serenity is an exercise in creating a fantasy world of ambience, atmosphere and darkness surrounding a distant light that’s easy to become immersed in. The songs are arranged to form a continuous stream of those characteristics, each composition building on the previous composition so the album feels like a sonic and visual epic comprised of eight parts. In some ways Something Like Serenity is like those epic songs recorded by prog rock bands that took up a full side of an album, most notably Rush on Caress of Steel, 2112 and Hemispheres. In terms of imagination and conceptual thought Something Like Serenity is like a logical progression of that mindset, each song a chapter contributing to a greater whole. Sondrous are not Rush, but they are visionary musicians with an idea of what they can create with a full album as their canvas. As I hinted, the instrumental pieces and lyrics play vital roles providing counterpoints for one another. Something I noticed about the resulting songs is they lead in one direction, then suddenly in another. Adrift is the first indication you won’t know what to expect from Something Like Serenity as they start with a warm picture, only to establish it as a distant memory: “You have touched my heart and warmed my soul/You have felt my scars and stilled my woes/Stay a while longer, why leave so soon/Goodbye lover, I will never forget you.” What follows are images of emptiness, reconciliation, dismay, regret hope, and finally acceptance. No new beginnings here, just emptiness and the serenity of accepting an endless void that has become your own. It’s for the listener to decide which feeling spoke to them more, if something was taken or if it was always a false promise, but the journey from beginning to end is beautifully constructed and masterfully executed as you cross the abyss from forgotten dreams and deep longing to eventual oblivion. The cover art is striking and gives you a profound idea of what you can expect from this album. You can check it out at Youtube and Bandcamp. -Dave Wolff

Track list:
1. Adrift
2. Something Like Serenity
3. With You in Time
4. You Are the Cosmos
5. Shelter
6. In Purity
7. Years of Solitude
8. The Wildering Stones