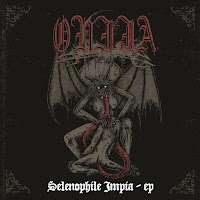 Band: Ouija
Country: Spain
Genre: Black metal
EP: Selenophile Impia
Format: Digital album
Label: Independent
Release date: April 27, 2021
Anyone ready to talk to about Spanish Black Metal? Well I am! So let’s do it!
This is the April 2021 release by the band featuring three songs
-Selenophile Impia
-Kerberos... Like Hell Dogs
-Therianthropoc Involution
Each of these songs presents their own unique twist to them and helps make this short listed EP something of a stand out.
First of all I love the direction this band took the ‘Black Metal’ because in my opinion they seem to have combined elements such as
-Ambience
-Prog Metal
to help maximize the sound and the creativeness of the EP! Something as small as the ASMR like wind sounds on the first nine seconds of the intro track to help set the tone of the song to the countless ‘Prog Metal’ style riffs and patterns thrown in throughout the songs to give it that extra flare and groove that ‘Black Metal’ aren’t used to having.
Also it’s great because even though they are combining the ‘Black Metal’ with a few other sub genres they don’t take away the absolutely devastating brutality and darkness that is ‘Black Metal’ they still have those nasty, growling vocal performances those heavy handed drum work and thick guitar solos it’s all there in spades so I love that they didn’t forget the real ‘roots’ of the main genre they were incorporating.
I’m going to keep this nice and short today just as the EP is itself! Because at the end of the day this is a compacted size monster of an EP with a lot of cool ideas going for it executed with absolute precision and technical ability! Go support the fellas and hopefully we can get a new album on the way! –Corban Skipwith
Lineup:
Midgard: Vocals
JM101: Guitars
Map: Guitars
Shogoth: Bass
Labelua: Drums
Track list:
1. Selenophile Impia
2. Kerberos... Like Hell Dogs
3. Therianthropoc Involution
Posted by Dave Wolff at 11:17 PM