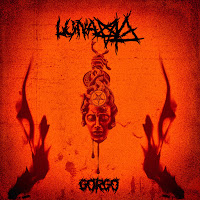 Band: Luna 13
Location: Los Angeles, California
Country: USA
Genre: Black metal, bass, industrial
Full Length: Gorgo
Format: Digital album
Label: Cleopatra
Release date: September 13, 2021
Back again and today I have quite the interesting album for you to check it out, it was something I definitely wasn’t expecting but one that grew on me none the less!
Gorgo by LUNA 13
So, this is the September 2021 release by the band and features 9 tracks (one of them being a Lil Nas X cover of ‘Montero’) but as I said going into this I just expected your run of the mill metal album based on the album cover and album title but that’s the furthest from what I received.
This album is what you’d get if you combined elements of ‘Black Metal’, ‘Nu Metal’ and ‘Industrial’ all into one big pot this would be the end result, it features some of the strangest yet catchiest instrumentation and production I’ve heard on a metal album to date!
Although I will say now that I feel this is the kind of project that not everyone will warm up to as easily as I did but still would provide a lot of interesting sounds, aesthetics and all around vibes that you’re not used to getting on a metal album!
Take for example the song ‘Upside Down’ I feel it’s the track that represents the ‘Nu Metal’ aspect to a tee. You’ve got that electronic production elements combined with some heavy yet rhythm based guitars and drums. Then you’ve got that repetitive hook said over and over ‘Upside Down, Upside Down, (Party to the ground) Upside Down’ I put brackets over that sentence because I wasn’t exactly clear on what was said there but the point is that hypnotic set of sentences said over and over in that chorus like style definitely reminds of something Korn or Limp Biskit would do on a track if they had thought of it first.
For the majority of the album it features heavy ‘Industrial’ elements with tons of experimental sounds and samples, noise inspired keys and rhythms added on top of the prominent ‘Black Metal’ vocal performances and instrumentation which does help in setting itself apart from all the other stuff I’ve heard lately and I’m sure will go a long way in standing out for not only that year but for years to come!
I really enjoyed this album and I feel if given the open mind and chance you will feel the same way. It’s risky, creative, different and brutal! What more can you ask for? –Corban Skipwith
Lineup:
Lilith Bathory: Vocals
Dr. Luna: Microbrute, drum machine
Track list:
1. Till There's Nothing Left
2. Dig
3. Unborn
4. Gorgo
5. Her Infernal Majesty
6. Hear My Call
7. Upside Down
8. Ghosts Of Night
9. Montero Cover
Facebook: https://www.facebook.com/luna13official
Bandcamp: https://luna13music.bandcamp.com/
Spotify: https://open.spotify.com/artist/7mzWnPp42hjTU6ZCAJX6Ae
Apple: https://music.apple.com/us/artist/luna-13/554262239
Linktree: https://linktr.ee/luna13official
Gorgo: https://orcd.co/luna_13_gorgo
Posted by Dave Wolff at 3:25 AM