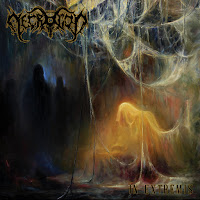 Band: Necrogod
Country: Sweden, Costa Rica
Genre: Death metal
Full Length: In Extremis
Format: Digital album, gatefold LP with UV Lamination
Label: Transcending Obscurity Records
Release date: July 23, 2021
On the 23rd of July 2021, chaos was born. The metal world hasn’t been the same since.
Necrogod “In Extremis”.
Naturally as I do this for a second job I come across so many albums, EPs, mixtapes and singles in my years that it’s not even funny. I made a promise to myself that if I didn’t like anything I was recommended I wouldn’t review it as I personally feel trashing an album on platforms like this can affect the bands future prospects, as people who would have been interested are now tainted by that one bad review.
Regardless, sometimes I find good albums, sometimes great albums and sometimes I hit pure gold and that’s exactly what we have here!
This nine track Goliath of an album has redefined the landscape of ‘Swedish Death Metal’ and ‘Metal’ in general because they bring a level of ferocity, brutality, sickness and sonic plague that we haven’t heard on this high level in quite some time.
To me this reminds me of a combination of prime era Cannibal Corpse and Children Of Bodom! You’ve got that beautifully complex and technical instrumentation of Bodom with that sickening abyss of speed and depth that Corpse! And combined that sound is just out of this world!
To me it sounds like every song passed they are trying to make the next track even more brutal, even more ruthless and twisted! It’s a mission of absolute anarchy and they don’t care if you’re up for the ride or not, either get it or fuck off!
The production value on this record is amazing also because it sounds so crisp and clear without sounding too polished or sterile! It’s the perfect balance in both production and delivery and I really can’t praise that level of performance enough.
The vocal performances are also some of the most twisted I’ve heard in a real long time! They didn’t hold back at all on this aspect, it sounds as disgusting and as feral as it’s supposed to! I don’t know how this band achieved their level of mentality to create such a free and chaotic record but every band should learn from them!
Even though this album came out last year it’s an album you can’t miss! Trust me, if you’re a metal fan this will be like Christmas Day for you! Don’t believe me? See for yourself! –Corban Skipwith
Lineup:
The Master Butcher: Vocals
Rogga Johansson: Guitar, bass, drum programming
Track list:
1. Bringers Of Blasphemy
2. In Mortal Confinement
3. The Brutal Path
4. Remain The Same Again
5. The Obsessive And The Deranged
6. Moribund
7. When Madness Has Taken Control
8. In The Reign Of Gore
9. Transcending To Persist
Posted by Dave Wolff at 2:20 PM