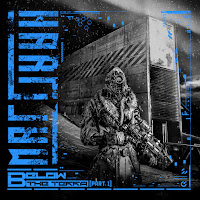 Artist: MATT HART
Location: London, England
Country: UK
Genre: Electronic, techno, industrial, ebm
Full Length: Below The Terra Pt. 1
Format: Digital, CD
Label: Independent
Release date: March 15, 2022
All caps in this motherfucker, nice touch.
Today, we have a very interesting edition of reviews as we talk about 3808 album released during the Icy Wasterlands believe it or not! And it sounds just as futuristic/apocalyptic as you would think.
With 9 tracks to work with he makes it very clear, how the future sounds and looks and let’s just say it’s no heavenly paradise (Isn’t it a bit worrying how every time someone releases a ‘futuristic’ album it’s always that the worlds turned to shit? It’s never a happy world?).
Anyway, there’s a lot to like about this album. One of them is the sound, it kind of reminds me of a fusion of early 2000’s ‘Rave/EDM’ mixed with ‘Industrial Metal’ and if those two had a freaky BDSM session love child then this would be the final product, it’s awesome.
I love the combination of those screaming vocals mixed it with those ‘Electronic’ vibes provided, it’s almost like you're listening to Boss level music in an epic RPG game, it’s the kind of music that spikes your adrenaline and makes you feel a certain way. To be honest when I first heard this record all I could think about was the music that played in ‘Tekken 5’ during the main story with ‘Jin Kazama’ where you have to walk around everywhere and they had similar music playing which was sick.
All in all, what a kickass project. It’s fun, energetic with elements of Metal infused. How can you go wrong? –Corban Skipwith
Track list:
1. We Survive
2. Decimate
3. To The Core
4. I Am Overlord
5. Terrorfying V2
6. Walk In Shadows
7. Cathartic
8. Absolute Zero
9. Last Rave