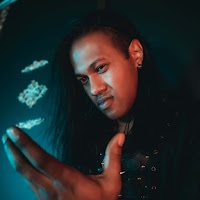 Artist: Sam Astaroth
Location: Toronto, Ontario
Country: Canada
Genre: Rap metal
Single/Video: Demoncore
Format: Streaming
Label: Independent
Release date: June 29, 2022
Despite being a relatively new talent, Sam Astaroth is known for being one of the vocalists of the Canadian progressive/folk metal band Iomair, and also for being the frontman of the (now defunct) Canadian melodic black/death metal band Astaroth Incarnate. His latest project “Demoncore” is an eclectic single/video, fusing various subgenres of metal with goth, industrial, deathcore, and hip hop. Though rap/metal crossover has been since the mid-eighties, Astaroth takes it far beyond what others have done with it.
By not paying attention to the diversity that’s still to be found in underground/extreme metal, people miss the point artists make when they combine resources from genres they discover themselves. In the end, it doesn't matter whether a genre is mainstream or not, or how “popular” it is. Listeners will realize a musician's growth is genuine and unfeigned if the musician is personally inspired by what he’s listening to. The versatility will speak for itself. In the case of “Demoncore”, there’s a great deal of inspiration to speak of.
A vocal cover of Cattle Decapitation's “Bring Back the Plague” released by Astaroth in 2020 (his first) left me floored and in awe when I heard it. As a phenomenally gifted death metal vocalist, he already can channel copious amounts of breath from his diaphragm, and his range is comparable to Glen Benton, David Vincent, Dani Filth and of course Travis Ryan. It's almost unimaginable how guttural, brutal and passionate his vocal delivery is in that cover, but you should hear it for yourself to see how much practice went into it.
Vocal covers of DMX and Ghostemane were to follow before Astaroth began recording originals. Through this exploration of rap and metal, Astaroth drew further inspiration from Nine Inch Nails, Slipknot, Korn, Mayhem and $uicideboy$, incorporating dark synth and aggrotech. His experimentation in “Portal” and “Dualism” culminated in the fusion of those styles in “Demoncore”. Despite not being exclusively metal by any stretch, it is nonetheless heavy and intense. At the same time it doesn’t diminish extreme metal’s role in the formula, but treats it as being equally important to the other elements added.
I’ve never heard the terms “trap metal” or “scream rap”; however they seem to fit what Astaroth seeks to accomplish through his work well enough. Perhaps those terms can be defined by deathcore vocals with hip hop enunciation, followed by a shift to vocals similar to Cradle of Filth and Hecate Enthroned, all underscored by atmosphere and thick guitar/synth production. Astaroth has obviously conjured something that can stand out from imitators if he puts as much effort into developing it.
While broadening its horizons, “Demoncore” is about encouraging people to define themselves by who they are, not by looks, ethnicity, lifestyle, aesthetics, beliefs or body type. Especially if you’re misunderstood or judged by anyone who thinks they know the path you should be taking. As with his music, Astaroth’s lyric writing combines rap, deathcore, and death metal equally well, transcending genre boundaries with an easily understood message. I only have one complaint for this song; it should have been longer than two minutes so it could make more of a lasting impression for newer listeners. –Dave Wolff
Facebook: https://facebook.com/SamAstaroth666
Instagram: https://instagram.com/SamAstaroth666
Twitter: https://twitter.com/SamAstaroth666
Tiktok: https://tiktok.com/@SamAstaroth666
Twitch: https://twitch.tv/SamAstaroth
Bandcamp: https://samastaroth.bandcamp.com
Soundcloud: https://soundcloud.com/sam-astaroth
Spotify: https://open.spotify.com/album/6FNPUvFhHihpNTXXsBd1fc
Youtube: https://www.youtube.com/channel/UC8LvnFozY1b_x90YI2U_80Q
Posted by Dave Wolff at 1:39 AM