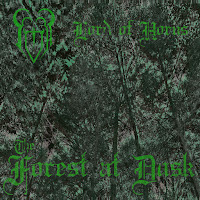 Band: Lord Of Horns
Location: Lodi, New Jersey
Country: USA
Genre: Black metal
Full Length: The Forest at Dusk
Format: Digital album
Label: MossCorpse Records
Release date: July 11, 2022
Lord Of Horns' May 2022 demo "Few Ever Survive the Night..." was reviewed last month by Corban Skipwith, who emphasized the intensity, carnage, and wrath they brought to the three tracks. Those tracks were intended for their debut full-length, "The Forest at Dusk", released today. The ferocity displayed on three tracks is one thing, but an entire album of it is a whole new level. You're going to bleed from your ears and pop out your eyes if you're unprepared for the sheer power Lord Of Horns summons.
With the resources at their disposal, the band embodies dark sorcery of long bygone times as convincingly as the BM bands of our youth. Lord Of Horns reach back so far in history that you aren't sure whether it refers to Satan or the pre-Christian horned god. It is this awareness of transcending good and evil that makes "The Forest at Dusk" so frightfully barbarous. It's surprising how well it fits the origins of second wave black metal.
Heavy distortion and atmosphere work well to convey the eighties-nineties vibe the band is trying to evoke. In fact, the drums are also given this quality, which increases the immensity of this recording. In addition to that and the songwriting, I also hear echoes of bands like Absu, Ophthalamia, Ved Buens Ende and Dødheimsgard, as well as old Darkthrone, Emperor, Behemoth and Beherit. This is old school, noisy, abrasive, ethereal, and reeks of new ideas.
The sun is setting over the western horizon as I write; dusk is beginning to fall; this setting seems to enhance the effect. Just hearing it would be enough to make you imagine how dark the forest is where Lord Of Horns invites you in. You are treated to a brief keyboard/acoustic guitar/spoken word passage before the most raw and primitive black metal explodes all around you, tumbling you headlong into the band's universe of darkness.
The lyrics of the intro “The Forest at Dusk” capture this atmosphere unerringly. The connection between the song and the inner visions the instruments evoke is made straightforwardly enough as you become drawn into this world and the surprises awaiting you, especially in the last verse: “Frantically trying to recall/The paths you have taken this far/Fearing the encroaching night/With its horrors and its plights/Further into the forest/At Dusk.” There is disquiet and morbid allurement about what you’re to encounter next.
While traveling deeper into the forest, you encounter ancient, demon-infested castles, tortured wandering souls, archaic books of magic, graveyards, witches, werewolves, and other night creatures, all told through lyrics like classic literature. According to the band, discovering them leads the traveler to discover the wickedness that lurks dormant within him. It could be then that a new journey commences, presumably for the purpose of enlightening the next traveler who might wander into these woods. Will this tale be told on the next album, or will it be something completely different? Stay a while and see what happens. –Dave Wolff
Track list:
1. The Forest at Dusk
2. Nightmare Castle
3. The Screaming Woods
4. Purveyour of the Black Book
5. Graveless Wraiths
6. Witch of the Wood
7. Ritual Hunt
8. Through the Woods
9. Screams of the Oskorei
10. The Sacrifice
11. Nocturnal Crusade
Posted by Dave Wolff at 2:42 PM