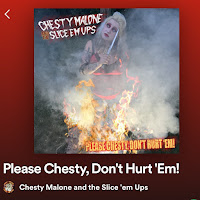 Band: Chesty Malone and the Slice ‘Em Ups
Location: Brooklyn, New York
Country: USA
Genre: Punk, metal, hardcore
Full Length: Please Chesty, Don't Hurt 'Em!
Format: Digital, CD, vinyl
Label: Cleopatra Records
Release date: June 24, 2022
Punk still lives, even in 2022. We have another new release from this New York shock/horror punk band, and if you read past reviews you know you'll be getting something callow, unbending, and inelegant in a good way. When we last heard from Chesty Malone and the Slice 'Em Ups, they had released their EP "Turn to Crime" and generated a buzz in independent zine publications. They're still on the rise as Cleopatra Records is releasing their latest full-length.
Since 2010, Chesty Malone and the Slice 'Em Ups have built their careers from the ground up, releasing most of their material independently and playing local bars and clubs. No Echo published another feature on them and predicted that the deal they signed with Cleopatra will greatly increase their fan base by exposing them to a wider audience. It seems they will succeed on their own terms after staying true to their principles for ten plus years.
Two and a half years in the making, “Please Chesty, Don't Hurt 'Em!” was recorded at their drummer’s studio. From the long writing and recording process to its mixing in Brooklyn’s Seizures Palace by Jason LaFarge, it contains vitality and experience than can both be attributed to the pandemic and its effect on the music industry. Every tumultuous moment of this recording vibrates with the band’s eagerness to release it for longtime fans.
From the first time I heard the band around 2015, I saw their potential to carry the torch for New York punk, while holding onto those aspects that kept it demiurgic and abhorrent musically, lyrically, and visually. With this new album, the band takes everything they displayed from the outset, honing and sharpening it with a vengeance. Additionally, their new lineup appears to have a wider range of influences, including classic metal, surf punk, and psychobilly.
I was initially surprised at how “Please Chesty, Don't Hurt 'Em!” is more metal-influenced and unsanitary than I remembered them. Jaqueline Blownaparte's vocals bring it closer to unruly and vulgarity-ridden. When it comes to convention, she throws it to the wind as a female punk singer. Taking after Cherie Currie, Wendy O. Williams, and Poly Styrene, she croons, growls, screams, and you can actually hear her sneer. Be forewarned if you thought Lady Gaga was dangerous.
The first singles chose to preview “Please Chesty, Don't Hurt 'Em!” are “Ticket Wallet Drugs & Chicken” and “The Fine Art of Choking”. The latter is said to have been composed as what No Echo referred to as “disco-metal”. To me it has more in common with classic Motown and R&B mixed with crust punk, but either way it sounds good. The former reminds me of the Misfits around the time they released “Earth A.D.” The promotional video is professionally shot by Rusty Glessner and has comedic elements fitting the song in their own way.
Other songs worth checking out are “The Worthy and the Worthless”, “No One’s Dyin’”, “Antibiotic Death”, “Citizens of the Grotesque”, “Energy Vampire” and “Torture Rock”. See the links below for all the zine’s coverage of Chesty Malone and the Slice 'Em Ups and contact them for ordering information. –Dave Wolff
Lineup:
Jaqueline Blownaparte: Vocals
Anthony Allen Van Hoek: Guitars
Diablo Rodriguez: Bass
Xavier Hons: Drums
Track list:
1. The Worthy and the Worthless
2. No One’s Dyin’
3. The Fine Art of Choking
4. Axing Doesn’t Hurt
5. Antibiotic Death
6. Ticket Wallet Drugs & Chicken
7. Citizens of the Grotesque
8. Torture Rock
9. Satan Never Sleeps
10. 13 Punks
11. Energy Vampire
12. Flesh Peeling Angel
13 Planet Impossible
Review of video "Zombie Relief Fund" by Robert Uller
Review of video "I Look Like Hell" by Abyss Forgottentomb
Review of CD "Now We’re Gonna See What Disaster Really Means" by Dave Wolff
Review of CD "Torture Rock" by Frank Garcia
Review of EP "Satanic Brooklyn Scum" by Kaya Chaos
Interview with artist Anthony Allen Begnal by Dave Wolff
Interview with Chesty Malone and the Slice 'Em Ups by Dave Wolff #1
Interview with Chesty Malone and the Slice 'Em Ups by Dave Wolff #2
Interview with Kings County Casket Company by Dave Wolff
Review: of "Turn To Crime EP" by Dave Wolff
Posted by Dave Wolff at 10:03 AM