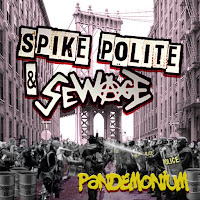 Band: Sewage
Location, New York City, New York
Country: USA
Genre: Punk
Full Length: Pandemonium
Format: Digital
Label: Rotten Bastards Records
Release date: October 10, 2021
Something I've noticed about punk is how much more politically aware it is becoming since the Bush and Trump administrations. I mean, it has always been politically aware, but it is even more so now, especially with social media providing more platforms for bands and singers to state their views about everything in the news these days. For one example, check out Jello Biafra's Youtube podcast “What Would Jello Do?” at the official Alternative Tentacles records Youtube. If by chance you're looking for another example, listen to the latest from NYC's own Sewage, showing the band heading in more of a socially conscious direction.
By now, it's practically unnecessary to point out how gentrification has taken place in New York over the years, especially since clubs and record stores are still being forced to call it a day. On top of that, cancel culture media spin was recently launched against a free concert The Shadow (an independent newspaper based in the city) organized in Tompkins Square Park on April 24 of last year. By the way, the allegations made about it turned out to be false, and shows in the park are still happening.
True, the world is changing. Aesthetics that were considered strange yesterday is now considered acceptable (mall punk and mall goth notwithstanding) and much of what Generation X started has become part of pop culture. This partly owes to television shows like “Stranger Things”, documentaries like “The Allins” and movies like “Fighting With my Family”. In the modern information age this presents possibilities of public shaming, but this still doesn’t seem to be slowing punk as a whole.
After years of experience as the frontman of Sewage, Spike Polite appears to be moving beyond writing about personal experiences as a punk in New York. “Pandemonium” also seems to be a fitting title for the state of the city, the country and the whole fucking world. When previously, he wrote about drinking beer and subway surfing with friends, now he’s writing about police brutality, racial profiling, rent increases, condemned buildings, politicians, the correctional system, and the pandemic. Touring outside the US and streaming their songs on Bandcamp and Youtube is presenting greater opportunities for the band to be heard.
Musically Sewage embodies the same formula they have since the 1990s. A little Sex Pistols, a little Ramones, and a little English Oi! with a gritty street vibe. The energy Sewage generates has always inspired people within earshot to get up and slam the guy next to you. On “Pandemonium” that energy seems geared toward specific issues such as those mentioned just above. Rather than fulfilling stereotypes about punks “Pandemonium” urges you to read, educate yourself and think. Maybe even to get involved in the way things are going now. Not just to keep playing shows but so people understand how punks have seen the world since the beginning. -Dave Wolff
Lineup:
Spike Polite: Vocals, guitar
Michelle Shocked: Bass, backing vocalss
Antonio Romano: Drums, gang vocals
Track list:
1. Police Brutality
2. Rent Strike
3. Anti Christ
4. D.O.C. Live
5. Outta Da Way!
6. Pandemonium
Posted by Dave Wolff at 10:30 AM