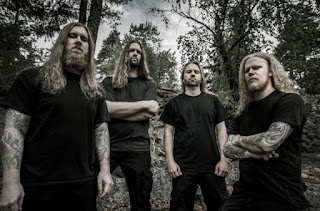 CUT UP
Behead The Dead (Official video)
From the 2017 album Wherever They May Rot
Metal Blade Records
What we have here is another benchmark of Swedish melodic death metal. With all the bands circulating on social media and signed to independent labels with elaborate names and elaborate logos, these musicians from Karlstad, Värmland choose the simple, succinct moniker of Cut Up to hook listeners. This phrase can call different images to mind, each one progressively graphic, gory and likely to nauseate those unprepared for the sonic assailment waiting for them. Cut Up formed following the disbanding of Vomitory who were active in the Swedish scene from 1992 to 2011. The bassist/vocalist and drummer were with that band the whole time which explains the early D/M feel Cut Up’s track is rife with. Recorded for the band’s second full length Wherever They May Rot (following 2015’s Forensic Nightmares), Behead The Dead builds from the basics of the genre, multiplying the intensity conceived by Entombed, Hypocrisy and Amon Amarth. This is the kind of song that catches you unprepared as it starts without any preliminaries, aiming straight for your brain cells, slicing them up for fun and leaving the remnants to rot and fester inside your skull. It comes close to Deranged on Rated-X and bands from other countries like Vader (Poland) on De Produndis. Both those albums were released in 1995 when brutal, straightforward death metal bands that condensed its energy into three to five minute songs were making headlines and getting rave reviews in the underground press. Cut Up takes notice of those days though I’m not entirely certain what Metal Blade meant by describing their “modern approach” unless it’s refers to the insurmountable wall of sound production and the sophistication of Andreas Bjornson and Anders Bertilsson’s lead harmonies. The “high musicianship” description I got since Cut Up has the precision needed to make the blast beats and slower parts work. As a lead vocalist Bjornson summons his guttural voice from deep in his guts and is able to maintain that depth through the violent intensity behind him. Bassist Erik Rundqvist backs him more than adequately as second vocalist and drummer Tobias "Tobben" Gustafsson fulfills his duties of pushing the song onward. The production of the video was an intriguing touch as it plays like an old VHS tape, complete with grainy shots and tracking issues. Wherever They May Rot is available now and you can see Metal Blade’s site for album, video and tour information. -Dave Wolff