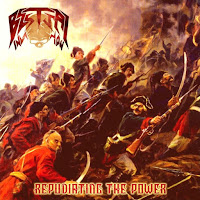 BESTIAL INVASION
Repudiating The Power (single 2017)
Shellfire Attack
Repudiating The Power is one of two singles released by Ukraine’s Bestial Invasion in 2017 (the other is Camera Obscura). The band's technical prowess and sophistication has developed greatly in three years, and the single sounds like it was arranged by musicians who have worked together for much longer. It's further testimony that a band can start from a rigidly defined genre that was cutting edge to begin with, embellish on the resources they had, discover new means to express them, surpass expectations and evolve, while being constant in observing their roots. Listen to the guitar transitions in the first thirty seconds  and you should see what I mean here. Following this with energetic riffs and solos that mingle thrash, classical and prog-metal with Testament’s dexterity and Kreator’s velocity, Repudiating The Power advances into ultramodern stomping grounds, magnifying the band’s boundaries. The vocals, comparable to Bruce Dickinson and John Cyriis of Agent Steel, are as top notch as the guitar harmonies. Going deeper into the song you’ll begin to hear shades of Fates Warning and Manowar. The chorus between the verses and time changes pushes the intensity along without becoming repetitive. One midsong section depicts a fierce battle complete with sword clashes and explosions, adding an unexpected theatrical edge. A lead harmony with experimental time signatures follows, then a brief section with new  progressions before returning to the chorus and a final harmony section. These arrangements show the profound thought involved in composing this song. Some tightening of the musicianship is in order but the band's ideas are spot on. -Dave Wolff