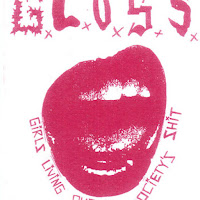 GIRLS LIVING OUTSIDE SOCIETY'S SHIT
Demo 2015
Independent
Place of origin: Olympia, Washington, USA
Genre: Punk, hardcore
Release date: January 16, 2015
It is just after midnight, and I have just finished listening to a demo by GIRLS LIVING OUTSIDE SOCIETY'S SHIT... or G.L.O.S.S. for short. This demo was released in 2015, and it seems to be quite the vicious onslaught of old-school punk. The production quality is very rough... but that is just how I enjoy it. While harsh and abrasive, the sound is still melodic and very easy on the ear drums. The drums are pounding and primal. Minimalist beats blast forward as the guitars shred, power-chords clearly the base for these tracks. This is not a bad thing! Many great bands use simplicity as the basis for their sound... and many of them do it very well. This group seems to be one of those bands, as they can tear along with many of the better known punk acts of today and yesterday. This demo is just over eight minutes long. I could not do with just listening to this once, so I put it on repeat three times in a row. It's just that good! Containing five short aggressive tracks, I would suggest this one to anyone interested in this style of musical revelry. Reminding me of the band A Global Threat, I am really taken back to my high school years. I went to see A Global Threat once in concert and the show was a rager. They were touring with Wednesday Night Heroes... another great band from back in the day. All in all, this is a great demo. I will not get involved with the politics of this... but who cares about that shit anyway? Punk is punk. Blare it... Buy it... Own it... this is a great one. -Devin Joseph Meaney