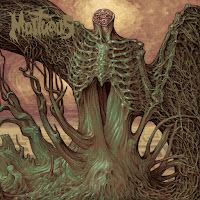 MORTUOUS
Through Wilderness
Tankcrimes Records (North America - CD, limited LP, cassette, and digital format)
Carbonized Records (North America - CD, limited LP, cassette, and digital format)
Dawnbreed Records (Europe - LP and CD format)
Extremely Rotten Records (Europe - cassette format)
Recorded, mixed, and mastered by Greg Wilkinson, Earhammer Studios, Oakland, California, USA\
Cover art by Marald Van Haasteren
Place of origin: San Jose, California, USA
Genre: Death metal
Release date: June 22, 2018
Having launched their quest for world domination in 2009, Mortuous are latecomers to brutal music. But its members have experience on their side, having worked in noted bands such as Exhumed, Repulsion and Necrot before forming this one. Pooling their experience was apparently the right decision for them. Their recently released album Through Wilderness has persuaded writers for established magazines like Revolver, Decibel, No Clean Singing, No Echo and Last Rites to join their cause and rave about them in print. Revolver for example had this to say: “Forget the morgue truck, the only thing needed to clean up the bodies after Through Wilderness is a dustbuster. Mortuous released a handful of demos before working on Through Wilderness and they have a grasp on what resonated with DM fans as early as 1988-89, when it was dark, dirty and aesthetically repulsive like most of the grindcore and proto-DM that lit a match to what’s now a worldwide bonfire. The spark that pushed the early bands to conquer the globe has been flawlessly preserved and cultivated on this album, with the same life and animation it had then. The similarities to Autopsy and Paradise Lost are the most obvious similarities, though from personal perspective I’d cite Napalm Death, Incantation and Necrophagia. Through Wilderness even begins with a similar tone to Necrophagia’s Season Of The Dead, with a tranquil acoustic guitar piece leading to something malevolent lurking around the corner. The time changes, percussion and lead guitars of the band members and guest musicians give the cuts intricacy and atmosphere as they fustigate your skull wreaking havoc with the grey mater inside. I altogether understand what Revolver magazine meant when describing Mortuous’ assault on all in its path, in which little is left for cleaning. Besides driving the guitars from behind, drummer Chad Gailey holds the material together no matter how many fills he adds to a verse. The vocals also show immense discipline as Mike Beams channels strength and power, projecting from deep inside his midsection. I imagine the band and the people they guested on this album must be in their forties by now. That they can sustain the level of intensity they do on Through Wilderness makes it a recommended listen. The band will tour the west coast in August; visit Earsplit PR for information as well as tour information for Corrosion Of Conformity, Neurot, Eyehategod and others. -Dave Wolff

Track list:
1. Beyond Flesh
2. Bitterness
3. Crysalis Of Sorrow
4. The Dead Yet Dream
5. Anguish And Insanity
6. Through Wilderness
7. Prisoner Unto Past
8. Screaming Headless