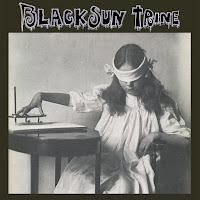 Band: BLACK SUN TRINE
Location: Los Angeles, California
Country: USA
Genre: Rock, metal
Full Length: Black Sun Trine
Label: Independent
Format: CD, streaming
Engineering by: John Avila
Mastered by: Stephan Marsh
Release date: April 2, 2018
Black Sun Trine is the brainchild of guitarist John Holffman, who wrote and recorded his debut full length with bassist Joh Avila and drummer Brandon Whynaucht. The brief amount of time between the band forming and releasing the album may not sound like there was much planning involved, but the songs sound like the release of energy that had accumulated for months or years before the first progressions were composed. You would conjecture Black Sabbath and Danzig exerted a massive pull on BST (and to a lesser extent Corrosion of Conformity, Metallica, Dio and Manowar) while writing what became their debut. This is no trivial effort to mimic celebrated bands, but songs with weight, reaching for their own identity and implying an innermost desire for personal and spiritual freedom. The gritty realism of the New York and Los Angeles streets where they were conceived is there, with a struggle to create something bigger than the sum of its parts and find common ground among the masses. Furthermore you won’t find self-indulgent “guitar god” rock here as the bass and drums are just as instrumental in shaping the material, as shown by “Impending Destruction” and “Pale Horse (phuc u).” This album doesn’t try to sermonize about change or force the listener to reconsider life choices, but represents an impassioned plea for people to see beyond differences. The potential accessibility here is a means to put the message out there. There is something about the lyrics and the way they’re sung that is capable of touching you and inspiring you to think about the state of the world, and what the world could be if enough people cared enough to try. Dio and Sabbath’s lyrics had the same profound desire and thought provoking quality, and Holffman gets it when it comes to what their songs really meant despite all the misconceptions surrounding metal since the 1980s. After all, “Holy Diver” and “Children of the Grave” were written by grown men who put thought into the lyrics, and “Black Witch,” “Reach Out,” “Nuclear War,” “Only The Strong Survive” and “Earth” seem to be natural progressions from those classics many years down the road. According to Holffman’s May interview, another BST full length is in the works. Its working title is Ascension and twenty songs have been written for it. There is more in the interview to read about this and the current album, as well as some of the personal experiences that inspired his songs. -Dave Wolff