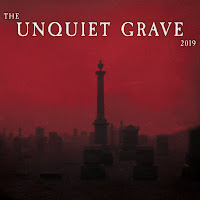 Band: VARIOUS ARTISTS
Compilation: The Unquiet Grave 2019
Label: Cleopatra Records
Genre: Goth, post punk, industrial, darkwave, experimental
Format: Streaming
Release date: June 14, 2019
It’s been a long time since I last listened to a compilation of goth music. When Margot Day of Metamorph forwarded me the Bandcamp link to this one I figured now was a good time to catch up. I already have catching up to do on underground music, so one more album shouldn’t be too time consuming. Metamorph’s song “Winds Of Durga” is featured on The Unquiet Grave 2019 with twenty four bands, not just goth but also post punk, industrial, darkwave and experimental. Unquiet Grave 2019 was released by Cleopatra Records on the twentieth anniversary of The Unquiet Grave volume one. I don’t know how many volumes are available, but Cleopatra Records are doing well for themselves promoting such name bands as punk pioneers MC5 and Iggy Pop, punk veterans Reagan Youth, goth rockers Christian Death, new wavers Duran Duran, rock guitarist Todd Rundgren and alternative rockers Jane’s Addiction. The bands here seem to be in good company, and I should hand it to Cleopatra Records for causing ripples in the industry, however small, and reminding us where real alternative music came from in a day when corporate pop singers present live performances inspired by goth like imagery. Sorry but I’m still compelled to question this when Cleopatra’s bands have struggled for years. Mainstream pop mediocrity is sharply contrasted here, from the gritty bludgeoning and mournful vocals of The Ink Bats’ “No Other” to the futuristic keyboards and hypnotically desire-filled vocals of The Sedona Effect’s “I Burn” and Antidote For Annie’s “Only You” to the atmospheric darkness and early punk of The Long Losts’ “Skeleton Thief”. The Long Losts is another band I’ve listened to; when I reviewed them a couple years ago I mentioned they had grace and refinement, with a theatrical quality in their songwriting. In “Skeleton Thief” the opening keyboards sound a little like Led Zeppelin’s “No Quarter” and after this the vocals sound like Debbie Harry resurrected as a vampiress. It doesn’t end there. Fear Incorporated’s “Ouija Board Apparitions” sounds like the soundtrack to a classic horror movie, The Drowning Season’s “Brighter Than A Thousand Suns” has guitars fueled by power metal, “Not A Brightly Lit” with its abrasive electronic sounds is inspired by the old TV serial “Tales From The Darkside” and the song contributed by Metamorph has a traditional middle eastern/Mediterranean theme with a variety of experimental sounds. To hear more of these bands visit the official link to the compilation. -Dave Wolff